Many young people gathered in front of the dwelling “Küß den Pfenning” on Franz Josefskai 21. Pupils from the Ettenreichgasse school and the musical secondary school came to set a worthy framework for the two stations and especially to commemorate Clara and Gerda Lichtenstein, who lived in this building. Mrs. Inge Svoboda had arranged the program with them. 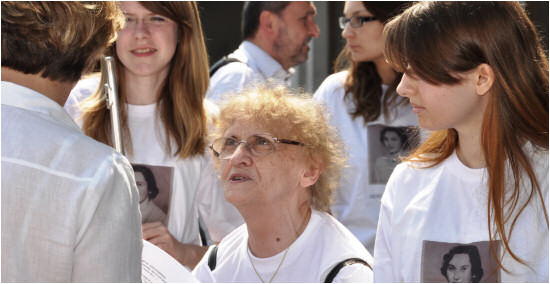 Ursula Stenzel, head of the district, emphasized the importance of commemoration and indicated that her family was also affected by the Shoah.

The following visit of the station in Ballgasse 1 was characterized by personal narrations and talks.

Ariel Avriel-Scheffer (on the right), an Israeli, set the station for his grandmother, her sister, their son and his young wife. They had married just before the Nazis’ takeover.

Also a tenant attended the inauguration. He and Ariel had already established contact before it took place.