Inauguration in Brigittenau on September 12, 2013

Peter Mlzoch acted as the guide throughout the solemn inauguration on Gaussplatz, attended by many interested persons. Municipal councillor Tanja Vehsely thanked the Association for ist its great commitment. Elisabeth Ben David Hindler pointed out that the district council had been showing great interest in reappraising history and in the commemoration work for a long time, and been doing a great deal for it. And that the Council had always been supporting the Association’s work with vigour and with many ideas.

Special attention was devoted to Herbert Scholder, who had come from the USA to commemorate his grandmother and aunt. The same holds for the tenants and owners of the dwellings, who had initiated the Stones and the plaque of their own accord, and done the pertaining relevant research. Herbert Scholder emphasized the importance of the Stone to his family, even though it could not change the fact of the murder.

We then went to visit each Station. 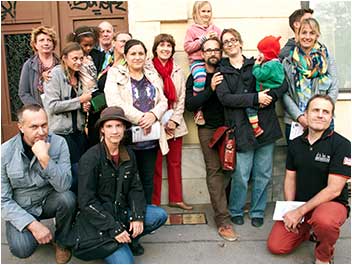 Initiators and supporters of the dwelling

Annelies Schimak and Christoph Wuschitz, initiators, said they felt responsible for people having lived here and having been murdered. That they, and everbody seeing the Stones, should think of them. 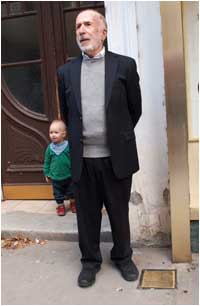 Herbert Scholder is invited to the flat of his relatives by the present tenants. Both sides show great interest in becoming acquainted. 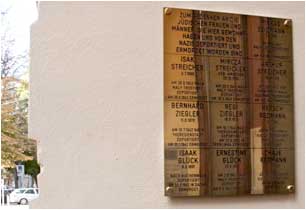 Mr. Jansky, owner of the dwelling, initiated this plaque on the wall, with his big wish “never forget”. Claudia Mohr did the research. 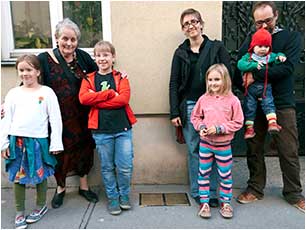 Margaret Gottfried-Rutte commemorating her great aunt and great uncle, and all former tenants of the dwelling.