On June 4, 2013 a group of relatives and interested persons met in Zelinkagasse 10 to inaugurate four new Stations of Remembrance. To begin with, Elisabeth Ben David-Hindler spoke about the aims and tasks of the Association and welcomed family members Alfred Posamentier from New York, Vivianne Walther-Kohn from Switzerland and Valeria Kohn from Brazil. 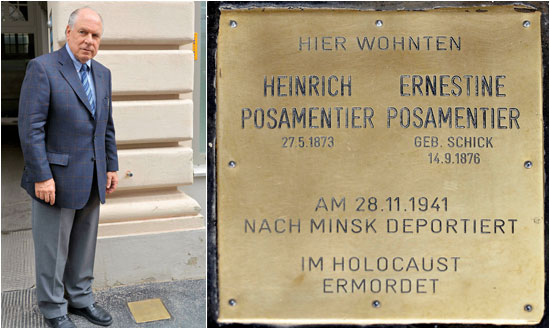 Speaking next was Alfred Posamentier, devoting the Station to the memory of his grandparents Heinrich and Ernestine Posamentier. He knows little about them himself. However, a cousin, having been on a Kindertransport at the age of 11, told him some details of their life. E.g., the family used to go on holiday to Puchberg am Schneeberg. Following the “Anschluss”, the family was forced to leave the flat in Zelinkagasse, and move to the parents-in-law. From there, they were deported to Minsk and murdered.

To Alfred Posamentier, the Station is a tombstone. He thanked the Association for their valuable work. Subsequently, Elisabeth Ben David-Hindler read out a text by Eva Bregman, who lives in New York and had been unable to come. The Station for her great uncle Alfred Stutz in Börsegasse 10 was not visited. 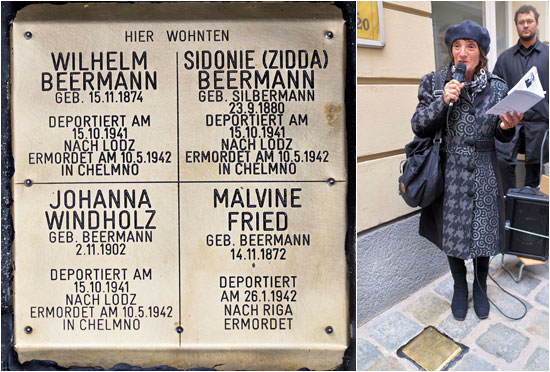 The group then proceeded to the third Station in Judengasse 5, which commemorates the relatives of Frankie Blei, Wilhelm and Sidonie Beermann, as well as Johanna Windholz and Malvine Fried. A very touching prayer was read out for commemoration.

Mrs. Ben David-Hindler reported that the Station had been partly financed by the internet platform respekt.net. Moreover, this Station and a second one had been supported by the Association of Certified Tourist Guides. City guide Walter Juraschek added that this year, the Association put an emphasis on the Jewish Ringstraßen-Palais the owners had been robbed of. 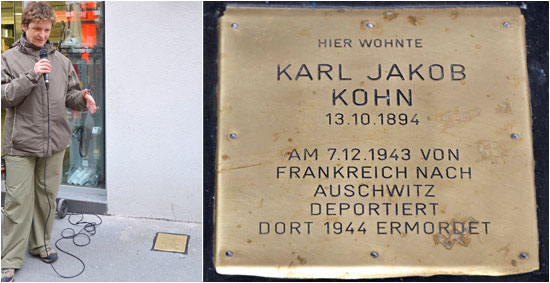 The Margaritkes trio delivered a touching musical performance with three songs. It was a particular surprise that the population of neighbouring Währing participated in large numbers and visited the Stations jointly with the relatives, thus expressing their sympathies. Ms. Kohn thanked everybody for coming and drew attention to the fact that yet today there were numerous persecuted and oppressed minorities, and that one ought not lose sight of these facts.