On July 4 2010 the inauguration of another two stations in the first district took place. A group of family members and interested gathered on Passauer square 6 to dignify Marta Ranzenhofer and Elfriede Falkner. Also the other 44 victims of the dwelling were commemorated. Numerous members of the ‘extended Ranzenhofer family’ were present.

At first Elisabeth Ben David-Hindler spoke about the diverse work of the association and the awards and support that it received in the past few years. That includes a lot of individuals, who get involved as well as institutions and politicians. She also spoke about the significance for the relatives who often regard the stones as commemoration stones in terms of gravestones. 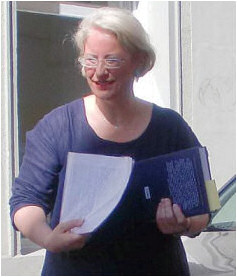 Waltraud Barton spoke about the destinies of Marta Ranzenhofer and Elfriede Falkner as well as their son’s and brother’s Robert Ranzenhofer who could escape and who lives in Switzerland at the age of 96.

After her compulsory change of residence Marta Ranzenhofer lived in Rotensterngasse in the second district. From there she was deported in 1942 to Izbica (Poland). The place of death is unknown.

Elfriede Ranzenhofer lived in Düsseldorf until 1943 where she could survive due to her protestant certificate of baptism and the concealment of her Jewish identity.

Her husband had already divorced from her in 1938, because as schoolmaster he would have been dismissed otherwise. She worked as druggist until she was denunciated and murdered in Auschwitz.

Only Robert Ranzenhofer could cross the border to Switzerland by hiking from Tyrol across the mountains. That way he saved his life.

A small group of people came along to the second station in Schauflergasse 2. Edmund and Alexander Sohr, who ran a lady’s coat shop were commemorated. The shop was arianised and Alexander and Edmund Sohr were murdered.

Meira Meisler the relative from Israel read out a short text about her family members. She had come with a friend to inaugurate the stone. 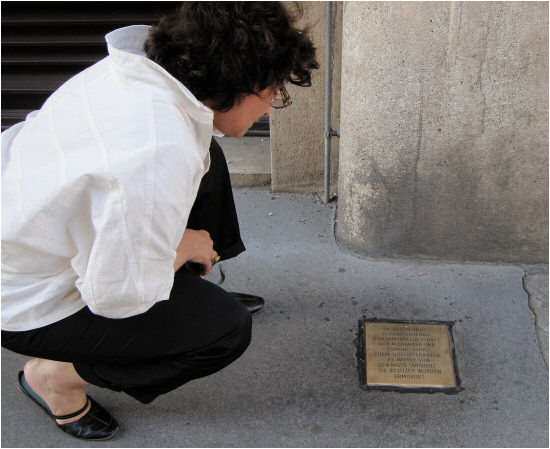