On October 10 2010 the inauguration of new Stones of Remembrance in the district took place in the Gebietsbetreuung Leopoldstadt (local support and coordination service). Peter Mlczoch led the diverse programme, which was completed by the musicians Hannes Guschelbauer (clarinet), Janine Schedy (accordeon) and Daliah Hindler (vocals).

District councillor Kresimir Mladensich spoke in his speech primarily about the historic atrocities before and during National Socialism. He mentioned the baiting of Jews that had already happened in the 1930s and the destruction of 42 synagogues in the so-called “Reichskristallnacht”. In the end he thanked the association and asked the members to carry on with their work.

Elisabeth Ben David-Hindler explained the cornerstones of the association work. She highlighted the support of the Gebietsbetreuung (local support and coordination service) for the second district and the fruitful cooperation with a catholic and a protestant parish. She herself draws strength from her conviction that our ancestors “stand behind us and they want us to be happy”.

Then she introduced the new stations in a Powerpoint-presentation. The stations are located in Stuwerviertel (quarter of the 2nd district) which was inhabited mainly by Jewish people from the working class. She read out a letter by Maja Thomas who lives in Sweden and could not come personally. She knows nearly nothing about her grandparents to whom the letter was addressed.

On Praterstern (big square in the 2nd district) two stones were set for those Jewish people who were forced to clean the streets with corrosive fluids. They are located in front of the monument for admiral Tegettgoff.

Thereafter a text was read out which had been written by the relative Margarethe Freunthaller and her brother Wilhelm Wolf for their grandmother Marie Steininger and their aunt Helene Wolf. Also the few remaining photos were shown.

Mr. Lutz spoke for the Adler family who lived in Ybbsstraße 28. He was a historical witness and knew the family. The stone setting was a gift from his daughter. He spoke about Dr Adler and about the destiny of his family. His brother was arrested as communist by the Gestapo and could only survive death because he was only 17 years old.

Agnes Lacher spoke about the destiny of the Jewish inhabitants in her dwelling in Ybbsstraße 6, about which she’d done a lot of research. 1938 there were 17 Jewish families there, which accounted for half of the tenants. 17 young people were displaced, 20 were victims of the holocaust. 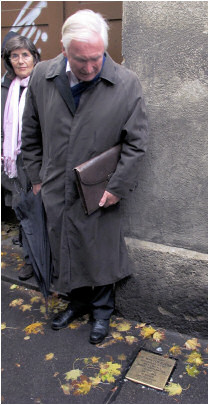 Sadly also the Israelitische Kultusgemeinde (Viennese Jewish Community) turned into henchman in some cases. The financial resources of the community were scarce therefore it supported mostly young people. The parents often couldn’t follow.

Ernst Löschner initiated a stone for a member of the resistance who was beheaded by the Viennese Regional Court. He worked as dentist and was bandmaster as well. He provided his doctor’s practice for secret meetings that were undercut by members of the Gestapo. Nonetheless he maintained his positive attitude also in prison. Ernst Löschner read out a poem that he had written in prison and highlighted that he wants to dignify him as a role model.

Then the walk along two of the stones took place in heavy rain. Nevertheless a big group of people attended.