Ceremonial opening of the 16th part of the Path of Remembrance through Leopoldstadt, part 2, on Sunday 18 September

Today the weather is not too kind to the many people present, it keeps raining and we get really wet in between. Nevertheless, at least 60 participants, relatives and interested people came to the opening of eight new stations of the “Stones of Remembrance”.

We meet at Rabbiner-Friedmann-Platz in Vienna’s second district. Mrs Hammer guides us through the afternoon. She introduces us to present family members of the new stones and tells us about the association “Stones of Remembrance”.

District Head Alexander Nikolai thanks everyone who is here today and especially those who have travelled a long way for this event. He reminds us of the frightening number of victims of the Shoah and emphasises the importance of the culture of remembrance here in Vienna. This stone commemorates Dobre and Hersch Rosenstadt and Emma Weihs.

Lauren Rosenstadt from the USA commemorates the grandparents Hersch and Dobre Rosenstadt.

Music professor Felix Lee and his partner Gertraud Kisser attend the opening of this station. They commemorate Irma and Richard Raubitschek and Emil Wallisch, who were also deported from Blumauergasse 4.

On the picture you can see Felix Lee as a seven-year-old boy holding the hand of Emil Wallisch. He had taken shelter in Blumauergasse, with the Raubitschek family and Emil Wallisch, during the time of persecution. Due to his mother’s marriage to the Chinese citizen Lee Wei-Ning, the family was protected from deportation. Michael Davis initiated this stone for his grandparents. He and his family from the USA, his wife Gilit Abraham and his two daughters Ariella and Maya represent the large family. 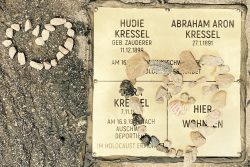 Kim Kressel presents: The war years, a book written by her father.

Mrs Kressel was able to have her father and aunt attend the ceremony via cell phone. Jonathan Rosemberg Kort (NY) commemorates his great-grandparents and great-aunt with his family. 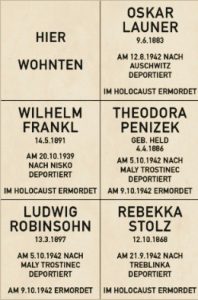 Martin Sonntag, a resident of the house, initiated this stone of remembrance with the house community of Nordbahnstraße 16. Together with other residents, they commemorate the former  murdered residents of the house.