Vienna 2, Volkertplatz 9 dedicated to the Jewish residents of the “Volkertviertel”

“Truly dead are only those whom no one remembers”

The “Street of Remembrance” in the “Volkertviertel,” the first project of the Association “Stones of Remembrance”, has impacted many people. A special feature on this street are the stones set in the ground, reflecting the idea of “stumbling blocks” (Stolpersteine) which originated in Germany, in memory of individual inhabitants of the Volkertviertel. The project was met with great acceptance by the city, and was regarded as a gift on the part of many Jewish people. 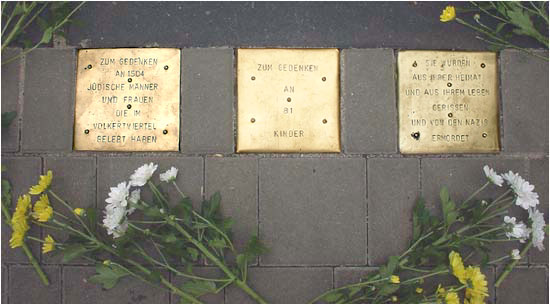 Before World War II more than 5000 Jewish Viennese lived in the “Volkertviertel” (Volkert- Quarter). With the invasion of the Nazis, the Jewish population became at once deprived of all their rights, their jobs, their belongings and their human dignity. Those who were refused flight were deported and murdered.

With the “Street of Remembrance”, we want to give back to the people, who were rooted here, a place belonging to their former home town, at the very spot where they had lived with their families. In choosing the commemorative stones we kept in mind people of different age groups. Many commemorative stones were placed for children. We also took into account the different places of deportation, many of which were in hastily established ghettos in small Polish towns, from where the deportees were sent to the extermination camps. Most of the commemorative stones are dedicated to people whose complete families were eradicated. 18 stones were set at explicit request of former Jewish residents’ relatives.

Our greatest desire is that this place of remembrance contributes to the healing of the deep wounds that have been inflicted on the Jewish population by the Nazis, by their followers and by those people who simply looked away.