On September 20 2010 the association ‘Stones of Remembrance’ was awarded the Karl-Renner-prize in the Viennese town hall. Further awardees were the association ‘Hemayat’ for support of traumatized refugees and the ‘Theodor-Kramer-organisation’ for exile literature. 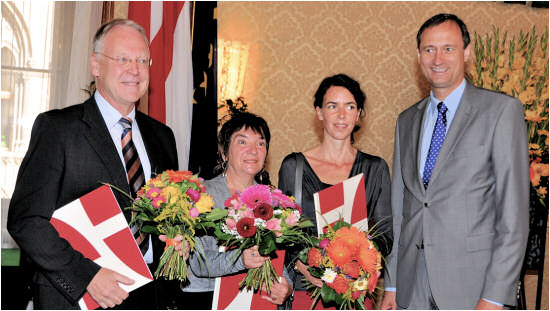 The Viennese Culture Councillor Andreas Mailath-Pokorny gave an introduction, in which he pointed out the important work of all three initiatives and also their similar fields of activity: ‘All three awardees are linked by their commitment for people that were displaced and their fight against forgetting these people. Getting torn out of the familiar environment is one of the most terrible experiences that can be made. For this reason the work that these three organisations accomplish is very important.’

The famous author Doron Rabinovici spoke in praise of Hemayat. The association cares for torture- and war-survivors.

2005 the first stone had been set for his parents. He built a bridge to his own past, when he had to leave Austria at the age of 15. At that time he could never have imagined that one time he would give a speech in the town hall. He described the association’s work:

Clemens Jabloner, president of the court of constitution spoke for the Theodor-Kramer-organisation. It propagates and preserves Austrian literature from the land of exile. Subsequently the prizes were awarded. The Karl-Renner-prize is endowed with 45 000 euros.

After the three honourees had given their short acceptance speeches the organisers offered drinks and snacks.