Mrs Nelly Sturm with her daughter Eva and her grandson Paul

Mrs Nelly Sturm, who lived until the age of 12 with her parents in this building, spoke about the fate of her parents, who fled to Belgium and were deported from there. She also explained how hard it was for her to leave the flat. 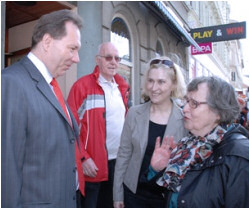 Franz Prokop, head of the district (in the photo on the left) delivered a speech, in which he pointed out how important commemoration projects are for his district. He also emphasized the importance of dealing with the past for the current citizens.

The ‘Wiener Bezirksblatt’ and the ‘Bezirkszeitung’ (local newspapers) printed lengthy articles to recognize the event.. Also the ‘Kurier’ (newspaper) reported on the project.