Inauguration of a Station of Remembrance in Penzing 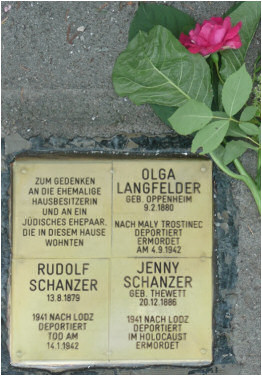 On June 3, 2011 the Stone for Olga Langfelder and the Schanzer married couple was inaugurated in a small ceremony.

„My grandmother Olga and my grandfather Ludwig Langfelder had a wonderful house in the 14th district, in Lautensackgasse 5. My grandfather was a retired councillor of commerce (Kommerzialrat).

They had two children: my aunt Edith and my father Richard, who is the only family member to have survived. My grandfather died from a heart attack the very day of the Anschluss. 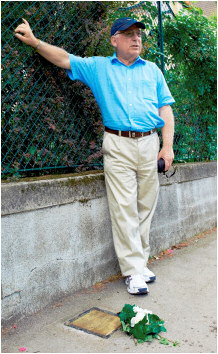 On November 10 (Kristallnacht) their home was devastated by the SA. My father was arrested and put to prison. He was beaten and had to wash streets.

My mother was lucky enough to get an affidavit for Australia, so we could flee from Austria – I being a baby at that time.

My grandmother did not succeed in getting the required documents. She had to sell her house and to move several times, before arriving in an “assembly flat” in the 2nd district. She was deported to Maly Trostinec and murdered upon the arrival.”