Inauguration of a Stone of Remembrance in Margareten 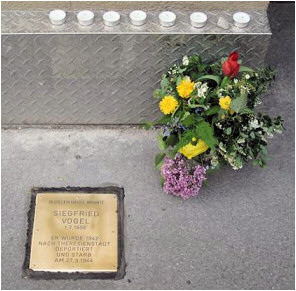 On April 27 2011 the solemn inauguration of a Stone of Remembrance for Siegfried Vogel took place in Wiedner Hauptstraße 112.

Elisabeth Ben David-Hindler spoke about the manifold work of the association and the numerous volunteers that make a big contribution to the association work and the anchorage of the project among the population.

Kurt Wimmer , head of the district, spoke about the repression of the National Socialist era in Austria, which is only now slowly coming to an end. He regards the Stones of Remembrance as part of the process of coming to terms with the past.

As head of the district he has “pleasant and necessary duties”. The support of the project is for him a necessity and he thanked the association for approaching him. He explained that the fifth district was known for the passport office in Wehrgasse where people who wanted to emigrate were treated badly.

He also made a connection with today’s racism and pointed out that he strongly opposes stigmatisation because of sexual orientation, religion or skin colour. 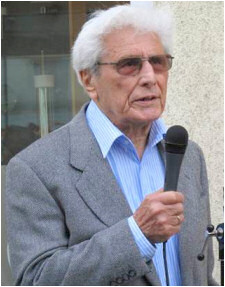 Martin Vogel spoke as relative. His father was Siegfried Vogel’s brother, called „Schigo“. The two brothers were very close. Siegfried Vogel often went to visit them. He was a real Viennese and liked to go to cafes to play cards.

During the economic crisis he employed Martin Vogel’s father and thus helped the family enormously. The brothers supported each other mutually at that time. Even when the Nazis came to power Siegfried Vogel tried to keep up the family life, but when he continued to visit he wasn’t welcome anymore among the neighbours.

Then he came in the night when he, the nephew, brought him soup to the hallway. “Schigo” often changed his place of residence until he was deported to the Theresienstadt concentration camp in 1942 and died there in 1944.

Martin Vogel thanked his grandchildren and great-grandchildren for setting the stone. The actor Peter Futterknecht (grandchild) and his daughter (great-grandchild) read out, in the hallway, poems by different authors and letters from Siegfried Vogel that he had sent to his wife and sons from the concentration camp. Thus the event came to a sad and atmospheric end.