Inauguration of a commemoration plaque in Rudolfsheim-Fünfhaus

In Herklotzgasse 21 a plaque was inaugurated for the Fuchs family on October 11, 2010. The family had come from Australia especially to attend the event. It was organised in cooperation with the initiative Herklotzgasse 21 which also arranged the commemoration project ‘the triangle of my childhood’ (Das Dreieck meiner Kindheit) in that building.

The speeches which were all given in English took place in the courtyard of the dwelling. Judith Pühringer spoke as representative of the initiative about the exhibition and the interviews with former tenants.

Then he spoke about the responsibility of politicians today to make sure that a persecution like in the Shoah never happens again. He expressed his hope that today Vienna is a city in which everybody is welcome. For the next year a commemoration plaque at the synagogue Turnergasse is planned in the district. His proxy Dr. Jennifer Kickert was present as well.

Liesl Ben David-Hindler welcomed especially the family members Alfred, Ben, Kurt and Karen. In her speech she spoke about the cultural and commemorational aspects of the projects as well as their symbolic side: ‘they seem modest, but they have a symbolic power’.

She explained that the 15th district is the 9th district in which the association worked (at that time). There were commemoration stones for 720 people. The active support of many people made that possible. She thanked Margit Wolfsberger who writes about Jewish emigration to New Zealand and Michael Kofler with his team of the initiative Herklotzgasse as well as Ben Weiss, a very dedicated family member. ‘I share your emotions.’

Ben Weiss spoke as representative of the family. He explained that the idea occurred to his when he saw a commemoration stone in the 6th district for a man with the name Fuchs. 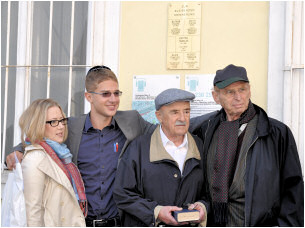 For his grandfather Kurt it was very hard to return to Vienna after 71 years, but it was here that he met his nephew whom he hadn’t seen for 65 years. He thanked Elisabeth Ben David-Hindler very warmly and promised in return to clean each stone one time.

Then the family recited the Kaddish for the murdered relatives in front of the plaque.

Finally the initiative Herklotzgasse 21 asked everyone in to visit the impressive exhibition and have coffee. That way the inauguration found its atmospheric conclusion.