Inauguration of two Stations of Remembrance in Rudolfsheim-Fünfhaus on April 24, 2014 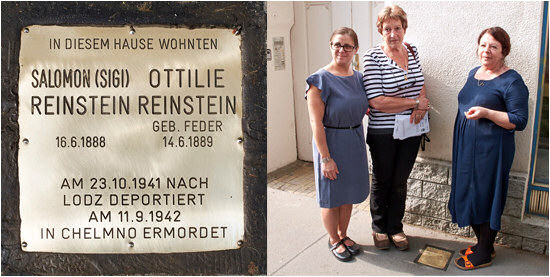 Elisabeth Ben David Hindler started off with a warm welcome to everybody. Ms. Claudia Dobias, vice Head of District, emphasized the importance of remembering history and making it clear that that such a thing must never ever happen again. For this reason, supporting this and other commemoration projects in the district is so meaningful.

Ms. Rhea Williams (great-granddaughter of Salomon and Ottlie Reinstein) was deeply moved and touched, and pleased by the sympathy of so many people. Her sister, Ruth Coppard, is very happy that her grandparents now have a place in Vienna. Elisabeth Ben David Hindler referred to the support of so many persons and institutions – without them, the project would not have become what it was. Having expressed her thanks, she concluded with the words “Vienna is standing behind us now”.

On the right: Christian Herget

This plaque on the wall, commemorating Dr. Moritz, Margarethe and Lotte Munk was initiated by Christian Herget, and financially supported by his father Walter Herget, his sister Monika Herget and his cousins Edith Breyer, Ilse Glosauer and Ursula Kleibel.

In the green courtyard Mr. Herget talked about his reasearch activities and about the life of the Munk family (see download homepage). The Herget family then invited us to a relaxed round-off to the inauguration.