Inauguration of a Station of Remembrance in Rudolfsheim-Fünfhaus June 29, 2011

A Stone for Hulda and Oskar Müller was inaugurated in Rudolfsheim-Fünfhaus with the active participation of the population. The family came from England especially to honour their parents and grandparents respectively. 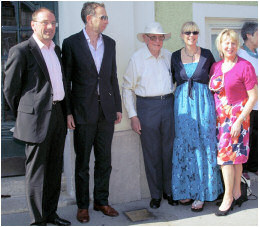 Head of district, Gerhard Zatlokal welcomed the Müller family and spoke about Jewish life in the district. Where a Synagogue had been located in Turnergasse, a memorial will be erected in the near future. There is also a very active private initiative (Herklotzgasse), bringing history to life: at important places of Jewish life, information available by phone is provided (see links). Zatlokal continued speaking about current life in Rudolfheim-Fünfhaus, characterised by the coexistence of 40 nationalities and 100 languages. He wants to reduce prejudices by personal encounters, and supports an existing inter-religious platform. Working in schools is near and dear to him, because „when you know where you come from, you know where you go to”.

The elementary school Johnstraße recently carried out a project “Flags for Peace”. Zatlokal concluded by emphasising that that inhuman policy must not exist in democracy.

Bruno Müller, son of Hulda and Oskar Müller, spoke as a member of the family. To him it is crucial that children today learn about the Nazi era. In the year 1985 he visited his former school in Diefenbachgasse, and saw the school records on himself, which had been kept to date. He pointed out that he still loves Vienna and that to him, Austria is the most beautiful country. He feels much better here than in the two preceding months. His friends back home would find him a changed man, he believes.

Mr. Müller then read out loud the story of his parents. He concluded by thanking Liesl Ben David-Hindler with all his heart for the active exchange of e-mails and the great support. He also offered this thanks to the students now living in his former flat for inviting the family.