Opening Ceremony of three Memorial Stations in Hernals, May 28, 2019

Around 30 people of different origins gathered under the rain in Schrammelpark in Viennna’s 17th District for the opening of three new memorial stones.
On behalf of the “Association of Stones of Remembrance”, Mrs. Roswitha Hammer heartily greeted those attending the ceremony despite the poor weather with warm words of welcome.

Following this, Dr. Ilse Pfeffer, District Head also expressed her gratitutde for the lively interest in the stones. Accompanied by District Deputy, Mr Jagsch, she stressed the importance of the stones and spoke about the many resistance fighters in Hernals who lost their lives. With good reason, she is particularly proud of the “Park of Freedom” with its monument to their memory that was created under her aegis.

Among the day’s participants were students of the University of Vienna from the Department of Anthropology along with guest professor Ruth Mandel from London. We were also accompanied by two Viennese policemen who visited the individual stations with us.

The initiator of this stone was Fabian Patzak, the great-grandson of Adolf Reiss. Ralph Seliger, the grandnephew of Elsa Reiss, and his family were also present. Fabian Patzak recounted how his great-grandfather, Adolf Reiss, had grown up in a small Galician town and through his success in the textile trade, became the proud owner of the house on Dornbacherstrasse. Even today, the house still carries the coat of arms of Adolf Reiss above its entrance. 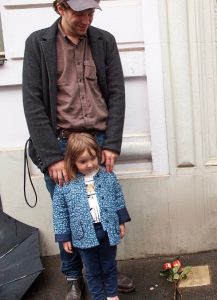 Irma Pollitzer is commemorated here by her granddaughter and great-grandchildren, Iris Slonim and her children Shelli and Alon, who have travelled from Israel.

Irma’s deportation cast a heavy shadow over the life of her husband and only son. This shadow was transmitted on to the next generation, both consciously and unconsciously influencing the life of the entire family.

However, Irma’s son also transmitted his father’s determination to overcoming this tragedy by leading a life of joy and success.

The stone was initiated by Audrey Pancis.

Jeff Pancis (son-in-law) Audrey Pancis (daughter), Nicole Baron, Jason Pancis (grandson) and Sharon Elwin (daughter), made the long journey from the USA to be present for the ceremony.

Also of particular gratification was the sympathy of a current resident of Geblergasse 68.