Inauguration of two Stations of Remembrance in Hernals on October 12, 2012 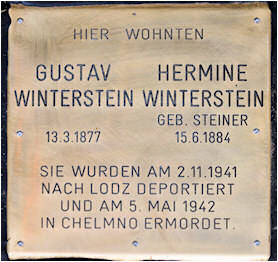 “The inauguration of the Stone for my grandparents was a very touching experience. In addition to reading out their story as outlined in the folder, Elisabeth Ben David-Hindler spoke touchingly personal words.

Also attending the event was the ambassador of Israel, who expressed his appreciation for the work of the Association in an impressive manner.

Ms. Loran, head of the Committee for Culture of Hernals, emphasised the importance of the project for the district. The latter was substantiated by the presence of several district councillors.

In a mansion neighbourhood on the fringe of the district, the original building in Braungasse 48 has meanwhile been replaced by a new housing complex.

Thomas Ganzberger, a resident of the housing estate, found out that 16 persons had been sent to death by the Nazis from this place. It is on his initiative that the Stones project had been set into motion.

The inauguration of the Stones was a major event for the numerous family members, some of whom had been born in exile in Columbia, others had grown up in the USA. Edward Beck conveyed the greetings of his 92-year-old father, who could never get over the murder of his parents. He thanked his cousin Ruth Contreras for researching and writing down the family history, and for organising the ceremony. The latter was embellished by the wonderful singing of some members of the Vienna Jewish Choir.

As a complement to the inauguration, a special folder has been published.