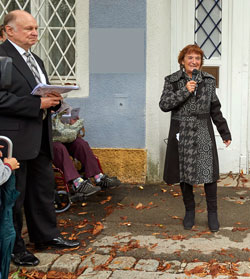 District councillor Mr. Stranig pointed out he felt very honoured to welcome all family members, and emphasized the importance for Döbling of confronting the dark side of the district. Particularly in today’s world we should be vigilant and demonstrate moral courage.

Judith Adler of the IKG (Jewish Community) feels very honoured, too, to attend the event and speak to participants. The Stones are very meaningful, she would like them best to be placed in the midst of the pavement, and so to become more visible. 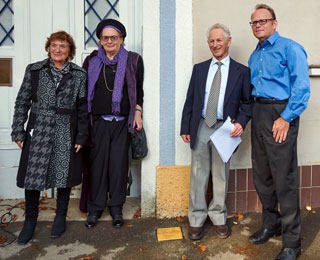 Elisabeth Ben David Hindler underlines the meaning of the Stones as symbolic tombstones. The project of these commemoration Stones is being supported by the City of Vienna and many other institutions. Tom Schiller talks about the importance of their commemoration Stone for the whole family, the members of which live in all parts of the world. Mairi Barkei reads out the poem „Der Judenstern“ (The Yellow Star), written by Hugo Rechnitzer, the grandfather of Tom Schiller.

The musical embellishment throughout the event was provided by Martin Auer. He presented very touching compositions and texts, partly written by himself. Cantor Mr. Lerner, in his Kaddish, remembered all Jewish people having been murdered. 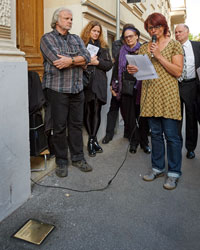 Robert and Ernestine had been living in this dwelling until November 1938. Martin Auer pointed out: „You have to have a very good understanding of history in order to prevent such thing to happen again“.

Nani Auer read out the last letter of her grandparents, dated August 5, 1942. 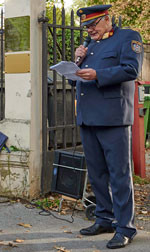 Johann Golop makes the point that fascism begins right there, where we refrain from confronting it by peaceful means. We have the duty to never allow such atrocities to happen again. Judith Adler said we could only be vigilant by not forgetting the past. 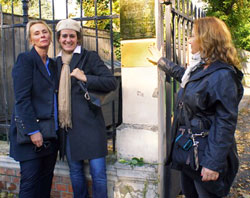 Jasmin Freyer commemorated her great-great grandmother. Two persons have been of great importance to her in placing the plaque: Elisabeth Ben David Hindler and Ina Piffl-Stainoch.

The latter had placed a white rose in front of Hohe Warte 32 for her great-great grandmother as a part of the “A Letter to the Stars“ programme. For today’s inauguration, Ina Piffl-Stainoch came with a white rose again.