Inauguration of a station of remembrance in Wieden 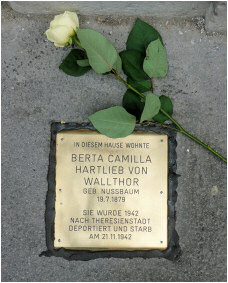 On April 27 2011 the Stone of Remembrance for Berta Camilla Hartlieb von Wallthor was inaugurated in Lambrechtgasse 13, fulfilling a great wish of Arthur Hartlieb and his wife Friederika Richter.

Leopold Plasch, head of the district, as well as numerous district councillors, attended the event.

Elisabeth Ben David-Hindler held an introductory speech in which she welcomed all the attendants and spoke briefly about the work of the association Stones of Remembrance. The head of the district thanked the association for its valuable work.

The painter and authoress Friederika Richter spoke about her extensive research on Berta Camilla, called “Milla”. She has written a book on the inheritance of Berta Camilla. 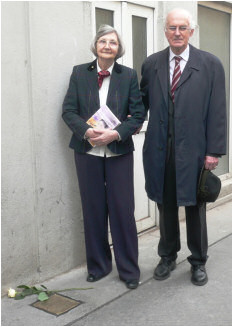 She spoke about the strong connection developed between herself and Milla in the course of her researches, and pointed out the significance of the Stone of Remembrance for her personally. “I sought her in six thousand letters and now she’s finally here.” She also said that she would often visit Berta Camilla’s memorial.

Finally, the actor Klaus Rott said a few words. He is a member of the Protestant community in Gumpendorf where Berta Camilla and her daughter went to get baptized in 1900. He spoke of the role of the protestant church during the Second World War, which he criticized. On the other hand, he is happy that this stone exists now. “In my thoughts I am with her”.