Solemn inauguration in Wieden, Draschepark, on May 9, 2014

Ernst Fitzka of the Association Stones of Remembrance acted as the guide throughout the celebration, with the Avanim trio providing musical embellishment.

Vice Head of District Lea Halbwidl acclaimed the work of the Association and offered her ongoing support for the Stones in the future. “We are very happy with your project in our district“.

District Councillor Emil Puller pointed out that Austria ought to accept responsibility for history, that the country had been changing a lot, and emphasized the importance of commemoration work. It is of utmost political importance to stand up against racism and antisemitism. Elisabeth Ben David Hindler bid everybody a hearty welcome, proceeding with a presentation of the families. Her warm words produced a feeling of a joint “commemoration family”.

Johanna Ambros (Blechturmgasse 18) said that her aunt had already reached an advanced age when she started speaking about her much beloved mother Stefanie Hoffmann. Ms. Ambros is happy to have had a memorial Stone set up for Stefanie Hoffmann, the more so as nothing else, not even a picture, is left to remember her.

Ulrike Plichta, having initiated the Stones in Radeckgasse 5, told us how she had come across architect Bruno Altmann when renovating her flat, and how her research on his life had been going. As a student, she had lived in a dwelling in the third district, in which also Bruno Altmann had lived for a while – a coincidence she finds particulary touching. She is very happy to see the commemoration Stones in front of her home each day from now on. Niklas Lämmel worked in the Terezin Memorial as a volunteer. He would now tell us the sad story of the murder of Wilhelm Waltuch, to which, however, a happy story was linked too: he had got to know his large family via his blog, and made friends with them.

Representing his family, David Rennert spoke about Lea and Pinkas Renner (grandparents). We then proceeded to a joint visit of the Stations. 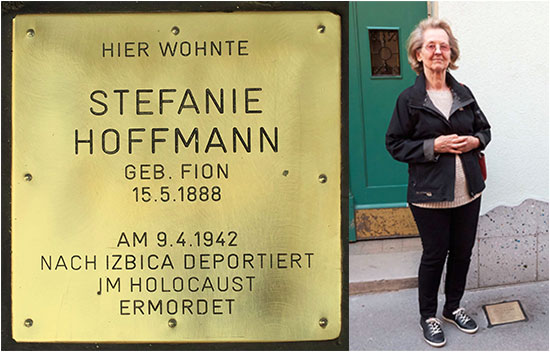 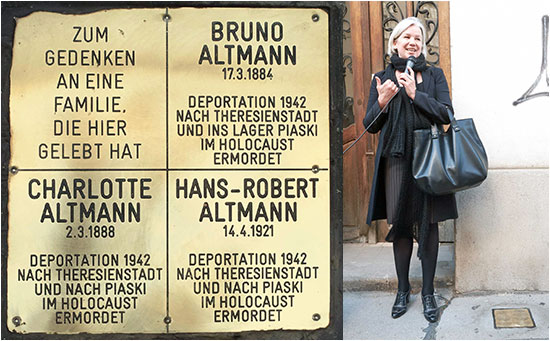 Four generations of the family have been living in this dwelling. The grandchildren are happy to inaugurate their commemoration Stones jointly with their families and all other participants. They wish peace to everybody.

This Station was financed by respect.net and the Schönberg Center.

Irene Suchy talked about her research relating to the life of Lilly Lieser. Burghard Stangl then played the song of loss, as composed by Konrad Rennert.