Inauguration of three Stations of Remembrance in Neubau on June 25, 2012

The first Station was inaugurated in busy Neubaugasse, in front of number 23. Elisabeth Ben David-Hindler, chairwoman of the Association Stones of Remembrance, welcomed all visitors and head of district Mag. Thomas Blimlinger. The latter, in his subsequent speech, thanked the Association for its work. 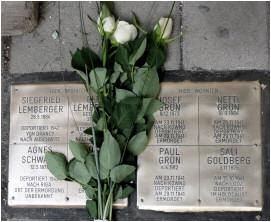 Elisabeth Ben David-Hindler then spoke about the Association’s activities in Neubau. In the past few years, three inaugurations were held, with Stones located in Neubaugasse 21, 23 and 36 as well as in Kandlgasse 37 and 44. She then handed over to Dr. Helga Kuenzl, who had initiated the Stone for Paul Grün, the great love of her mother. She continued to point out that the process of coming to terms with the past was very slow in Austria. She finds it gratifying that the name of Paul Grün is now visible to everybody passing by. The names of his parents, Josef Grün and Netti Grün, are also perpetuated in this way.

Ms. Kuenzl has also experienced a great personal enrichment from the Grün family. Her mother had been entrusted the Grün family’s upright piano for conservation. It was on this piano that Ms. Kuenzl later learned to play.

The group then proceeded to Neubaugasse 36, where one Stone had been placed for the murdered inhabitants of the dwelling, and another one for the Jewish artists. 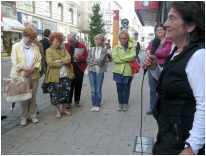 The building had been the centre of Austrian cinema culture for a long time. Ms. Ben David-Hindler read out loud a text dealing with this facet of the building, and with the ambiance in Café Filmhof, which had also been located here.
Subsequently, Daliah Hindler read out loud a text written by Mag.a Malli, who had initiated this Station. It is of particular importance to her that her children, “growing up in a time when the last holocaust survivors will have died, become acquainted with other silent witnesses.”

To conclude the event, deputy head of district Madeleine Reiser spoke about the importance of the Association’s work for the district.

The Stone in Kandlgasse 37 was inaugurated too, but not visited, because the family members had not been able to come from England.