Inauguration of one station in Neubaugasse 21

On May 7 2010 the inauguration of the their Station of Remembrance took place in Neubau. Basche, Chane and Josef Gelber, who had lived in that dwelling until their deportation, were commemorated. Numerous family members from all over the world met in Vienna. Judith Gordon and her brother Paul came with their families from England and the USA. A great grandchild arrived from the Congo. 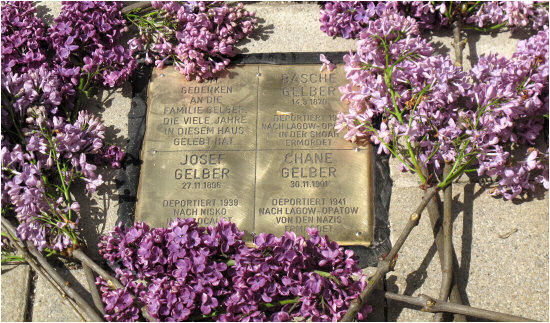 Madeleine Reiser, vice head of the district, gave a speech in German and English. She spoke about the various forms of cooperation of Jewish and non-Jewish people in Neubau. Prior to 1938 there had been a rich Jewish life that shaped the district. She also expressed her conviction that every Viennese inhabitant should deal with the past, which was ignored for a long time. She thanked particularly the descendants of the Gelber family for their presence und recognized their murdered relatives.

The current tenant of the apartment that had been owned by the Gelber family came to the inauguration as well. He agreed to clean the stone regularly. In addition he invited the family to visit the flat.

As representative of the Gelder family Judith Grodon delivered a speech, in which she told her family history. Her grandmother Basche Gelber and her children Josef, Chane and Zofia Gelber lived after their migration from Poland in Neubaugasse 17. The whole family participated in Vienna’s cultural and social life. They went to ‘Burgtheater’ (famous theatre) read Schiller and Goethe and went hiking in the Vienna Woods.

This life came to an end when the Nazis invaded Austria. 1939 Josef was deported and in the following year also Basche and Chane. Zofia managed to escape to England. For a long time it hadn’t been clear what had happened to Paul and Breine, Josef’s son and his wife. Judith Gordon’s part of the family assumed that they were dead. Only a few months ago she discovered during her research that the family lives in the USA. They met in June 2010 for the first time.

Pupils of a secondary school had prepared texts for the inauguration, which were read out loud by two pupils in English and German. They expressed their sorrow that the family had to bear so much pain and their gladness that there is now a commemoration stone. They had brought lilacs, which they laid around the stone. Judith Gordon explained that these were her mother’s favourite flowers.