Solemn Inauguration of three Stations of Remembrance in Neubau on June 3, 2014

In his welcome speech, Head of District Thomas Bliminger expressed his thanks to the Association for its sustainable contribution to commemoration. 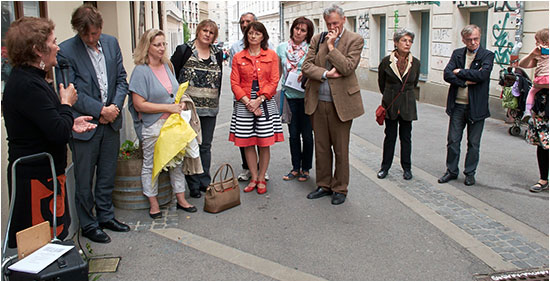 Having outlined the history of the Association, Elisabeth Ben David Hindler thanked the district and all institutions concerned for their financial support, and all initiators for making the Stations come into existence. All family members were proud of us for welcoming them in Vienna again, she emphasized. The Stones are symbolic tombstones for their beloved ones. 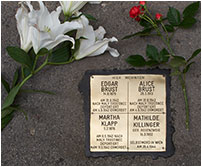 Sven Hartberger, initiator of the Station, has been living in this dwelling for thirty years. He had been in touch with people telling him that neighbouring inhabitants had been deported by the Nazis. He then thought he had to do something in order to set a visible sign. The Stones are meant to encourage all of us to do the right thing at the right time.

This Station was initiated by Erna Hofer, Helga Böhm and Karl Hofer. The father, Karl Hofer, had known the Teweles sisters personally, and told many an amusing story about them. Erna Hofer is happy that now there is a visible tribute to them. To her, today’s inauguration is like a welcome to the two sisters. 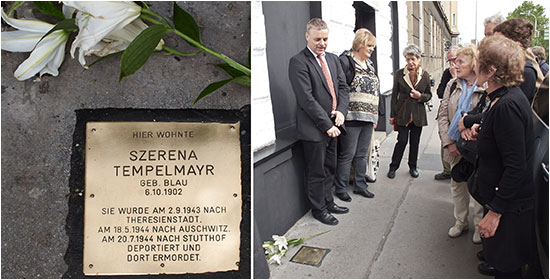 Hans Jürgen Tempelmayr (on the left) is pleased with the opportunity to commemorate Szerena Tempelmayr. She is a relative whom he did not have the chance to meet. Szerena is a very popular first name in Hungary, meaning “merry and cheerful“.