Inauguration of four Stations of Remembrance in Innere Stadt – July 2, 2011

Werdertorgasse 17 was both the meeting point and the place of the first Station, where a commemoration plaque for Mathilde und Leopold Feldstein was inaugurated. All speeches were delivered in English, since the grandchildren Mr. and Ms. Fenton had come from Scotland.

Maria Graff, head of the 1st district’s committee for culture (Kulturkommission) thanked the Association Stones of Remembrance for the initiative. She recalled the fact that in the 1st district you are confronted with the Jewish past each and every day. She is particularly pleased that the plaque has been fixed on the wall of the dwelling, which is a rare exceptional case.

Liesl Ben David-Hindler spoke about the development of the project. „It came to us by chance“. It is a Viennese project, deeply characterised by the cooperation of many and different people. E.g., the Association of Certified City Guides assumed sponsorship for three stones in Werdertorgasse 15. They try to make a contribution to healing the wounds.

Mr. Richard Fenton started by placing a bouquet of flowers beneath the plaque, and with the words „welcome home grandparents“. 70 years ago, his grandparents were forced to leave the dwelling. Now being a grandfather himself, he understands better what it means to be grandfather. He hopes that his grandparents would be happy with what he has been doing in his life. He then thanked everybody for having come and participated. 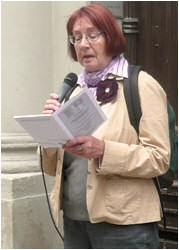 Next door, Werdertorgasse 15, the next Stone for Julia Sprecher was inaugurated. Gertrude Quast is a woman who has done a lot of research on Julia Sprecher and is going to publish a book about her. She read out loud a text about her life, and a letter to the wife of her nephew written in 1940.

As for Margarete, Walter Josef und Anneliese Klara Weiss, no family member survived. Their Stone was sponsored by the Association of Certified City Guides. Bibiane Krapfenbauer, head of the association, delivered a speech. The association is fully aware of its educational mandate, and opinion-shaping role. As for dealing with the subject of holocaust, she stated that “there are no words, but we are confronted with it daily”. The subject is raised in almost each guided tour, as even a simple tour of the Ring comes past Morzinplatz, where the headquarters of Gestapo was located.

Walter Juraschek, guide of the tours for the Association of Stones of Remembrance, is very much involved in imparting the subject to the city guides. The members of their association have guided many tours unremunerated in order to finance the three Stones.

The next station to be inaugurated was for Broncia, Leon und Alexander Nagler, in Wipplingerstraße 13. Brigitte Landesmann, granddaughter of Broncia Nagler, spoke about her family. Also attending was her father Moritz Nagler. She explained that she was carrying the names of both her grandparents, being named Brigitte (Broncia) Leonore (Leon) Landesmann. She continued to say that she was especially glad that her grandparents and uncle now were snatched from anonymity thanks to the Stones. Otherwise, she stated, she did not know much about the life of her grandparents.

Liesl Ben David-Hindler had a short conversation with Moritz Nagler. He said that his brother also had emigrated to the South of France and got married there. The couple both were deported to Auschwitz, his wife being pregnant. Himself, the youngest brother of four, used to be spoilt by everybody.

He was in a camp in Transnistria (Moldavia) during the war, and couldn’t have survived without his wife. When they returned to Vienna after the war, the opera singer then living in his flat moved out.

The last station to be inaugurated was a Stone for Friederike (mother) und Arpad (son) Grünwald at Petersplatz 3. It had been initiated by Christian Burger, tenant in the dwelling. 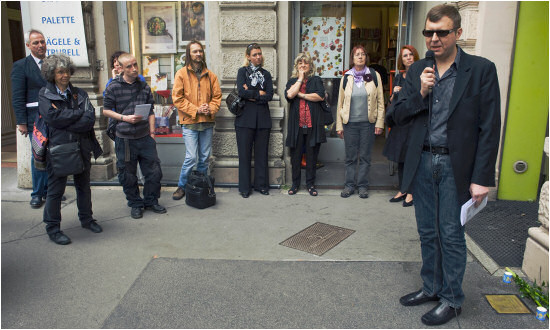 Christian Burger spoke about his personal motivation to see to it that the stone was put there. One day, he found white roses in front of the dwelling, placed by the initiative Letter to the Stars. His awareness was aroused, he was brought to think about who had been living in his own flat. And he is living in the very flat where Friederike and Arpad Grünwald had been living. He tried to trace the son of Arpad, but did not succeed. He finds it especially striking that many people stop to look at the Stone. To conclude the event, he offered an invitation to his flat and refreshments.