Inauguration of a Station of Remembrance in Innere Stadt on June 30, 2012 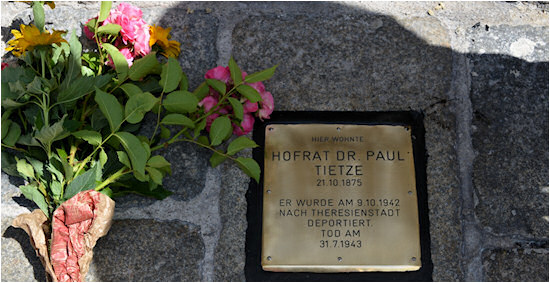 In Rathausstraße 20, a Stone of Remembrance for Hofrat (privy counsellor) Dr. Paul Tietze was inaugurated on June 30, 2012. In view of the extreme heat of the day the speeches were delivered in the shelter of the building’s entrance. A very large number of family members attended the event, one of them having come from Australia especially for this occasion.

Elisabeth Ben David-Hindler spoke first, pointing out that the Association had already held inaugurations in snowstorms, rainfalls and heat, but that “in contrast to the persons murdered we have the chance to protect ourselves.” She went on to say that, being a representative of the second generation, she had been feeling for a long time that she was bound to suffer. To her generation, the notion of natural death was unfamiliar, because they hardly saw humans dying of natural causes. She concluded with her conviction “that our grandparents want us to be happy and are standing behind us”.

Then David Tietze from Australia spoke on behalf of the Tietze family. His grandfather Hans Tietze, a nephew of Paul Tietze, had fortunately managed to escape.

Subsequently, Arif Caglar, chairman of the Tietze-Society, spoke about the life of Dr. Paul Tietze. He had been born in Prague as Paul Taussig and later changed his name.

He studied law in Vienna and became a lawyer. His wife, Stefanie Tietze, born into an aristocratic family, died in Vienna in 1939. Paul Tietze was expropriated, had to leave his flat and move to an assembly flat. He was deported to Theresienstadt in 1942 and died there on July 31, 1943.

Timur Tietze then read out loud excerpts from the book „Nachschrift“ by Heimrad Bäcker, where the author worked up written testimonials of the indescribable “National Socialist killing machinery”. The speaker and all attendants were deeply shaken.

The inauguration ended with Johannes Hahn playing the violin.