Inauguration of two Stations of Remembrance in Innere Stadt on April 28, 2012 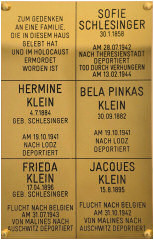 It was a very touching day for Ms. Elfie Kazarov and Mr. Francis Deutsch, both in their late eighties, and for their families.

The meeting point for the inauguration was Drahtgasse 3, where Elfie Kazarov commemorated her grandmother Sofie Schlesinger, as well as two aunts and their husbands. Ms. Ernestine Roniger, owner of the dwelling, had given permission for a plaque to be fixed on the wall. She also attended the event with her family.

Elfie Kazarov – her son and daughter in law had come all the way from USA – held a speech, telling about the very good times she had spent in this dwelling. The numerous family used to meet there for afternoon coffee Jause each Sunday. She then often stayed to spend the night with one of her aunts. However, she also has the terrible memories of their loved ones being deported, and has not overcome this shock and the sadness even today.

The group then walked to the second Station, located in Heinrichsgasse 3, where it was welomed by several interested residents. In order to commemorate Margarethe Deutsch, her son Francis Deutsch, his wife Sheila and their daughters had come specially from England.

In his speech, Francis Deutsch said that he himself had lived in this dwelling with his mother. He described her as “a genuine Viennese”. She had been very open-minded and interested in arts. Music used to play an important role in family life.

As for the present state, Francis Deutsch pointed out that the social situation was very disturbing. In Hungary, the political situation is marked by an anti-Semitic party. “Race” is becoming a catchword again.

He concluded by asking everybody to join hands and recite a joint “niemals wieder” (never again). It is of great importance to him that passers-by commemorate his mother. The Deutsch family was offered the opportunity to visit the former flat, and was invited for coffee by another lady-resident two days later.

Mr. Deutsch has also been invited by the present lady-tenant to spend one week in his former flat with his wife.