Inauguration of a Station of Remembrance in Innere Stadt 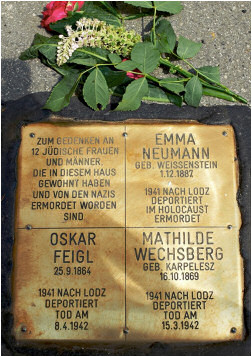 On June 3, 2011 a Stone of Remembrance was inaugurated in Biberstrasse 22 with active participation of the population. Mr. Langfelder and his wife came from Australia especially to honour his grandmother Emma Neumann. Therefore, the event was held almost exclusively in English. Walter Weissenstein, 91 year old nephew of Emma Neumann, was also present.

Maria Graff, head of the 1st district’s committee for culture (Kulturkommission) gave a brief and impressive speech, welcoming warmly the members of the family and emphasising her support, both personal and financial, of the Stones of Remembrance. She affirmed her support of future projects in the 1st district, too.

Elisabeth Ben David-Hindler first presented the attending members of the Association, Vally Steiner, Ernst Fitzka and Daliah Hindler. Since this year, the Association is active in 11 districts. She said the 1st district had a long Jewish history. The Stones of Remembrance are meant to bring solace to the family members. As usual, she underlined the importance of volunteers, who clean the stones, do research, initiate commemoration plaques for tenants of the dwelling on their own initiative, and do much more. The Association’s existence is also ensured by the financial support in the shape of sponsorships, and from National Fund and Future Fund of the Republic of Austria.

Mr. Langfelder thanked Elisabeth Ben David-Hindler for the opportunity to commemorate his grandmother in Vienna. He himself was born 14 days before the Anschluss, and was able to flee with his parents. Many of his uncles, aunts and grandparents were not so lucky. Both grandfathers died a “natural” death (if the heart failure of one of them on the day of the Anschluss, or the heart failure of the other at the loss of the factory a little later, can be named a natural death). Mr. Langfelder said his grandparents had been caring persons. Emma Neumann had grown up in Rodaun, and lived in Herrengasse with the grandfather, until they had to move to Biberstrasse.

To imagine that even today genocide is committed in many parts of the world, is unbelievable to him. He concluded thanking the Association: thanks to the Stone of Remembrance for his grandmother he could finally close this part of affair, he said.

Walter Weissenstein, nephew of Emma Neumann, expressed his hope that in afterlife God would recompense Jewish people for all the sufferings they had to endure in the Shoa.

Elisabeth Ben David-Hindler voiced her conviction that “the parent generation is proud of us” and concluded with the words „we are together and our souls are together“. 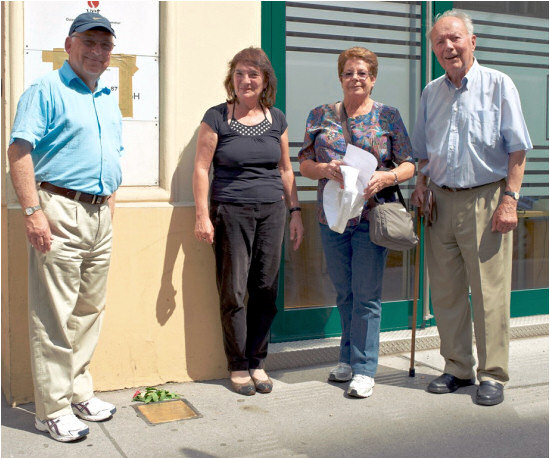