In his speech Mr. Homole, head of district, declared his support for the project, praising it lavishly. He promised continuing financial support.

The ambassador of Israel spoke of the project in very high terms, and in warm words. What was so special about it, he said, was that people were not forgotten but received a place in their lost homeland. It was amazing just how many Jewish persons had lived in Vienna – in practically every street.

Vally Steiner spoke about the genesis of the Association, and of its objectives. At the time of its formation in 2005, the present size of the project had not been foreseeable: it is now working in 14 districts, with 200 Stones commemorating 950 persons. Vally Steiner read out a text written Mr. Juritsch about his family’s history, which he also provided by for the brochure, and Ms. März translated the speech and the text into English.

The trio „Margaritkes“ deliverd a touching musical performance with the three songs. It was a special surprise that so many tenants of Währing had come to visit the four Stations together with the family members. 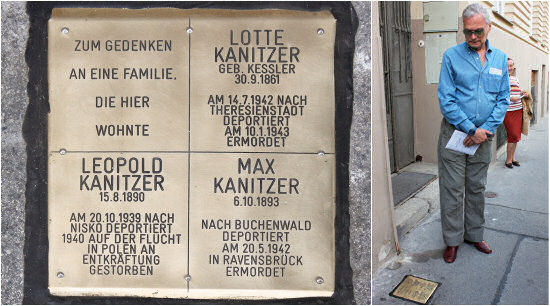 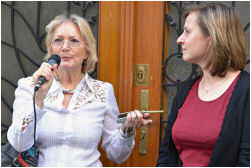 The young family now living in the apartment invited Zehava Shlam and Gadi Grunhut. As a wonderful coincidence, one of the family’s sons is called Moritz, as had been the relatives grandfather. 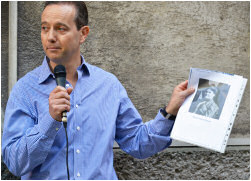 Gentzgasse 40-42: Paul Huttrer (on the right) and Caroline Sansone (from England) commemorate their grandmother and great grandmother. Paul Huttrer spoke about the history of his family. This commemoration was only made possible because Dr. Konrad Schröder (on the left) had come across their names and a surviving son when researching Gentzgasse 40-42. Dr. Schröder spoke about the history of the tenants of the dwelling. 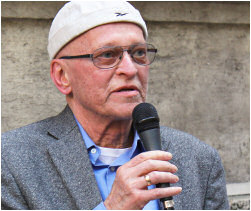 Gentzgasse 57: George, Joanne and Rose Günsberger, Fran Leaupeppe, Elisabeth Pacey and Mary Petterson had come from Australia to commemorate their grandparents and great grandparents. George Günsberger spoke about the history of his family, who had been the owners of the dwelling and living in it for many years. Mr. Günsberger has made his speech available to us (download).

It was particularly touching for Mr. Günsberger to inaugurate the Stations jointly with the other family members.