Inauguration of a Station of Remembrance in Währing 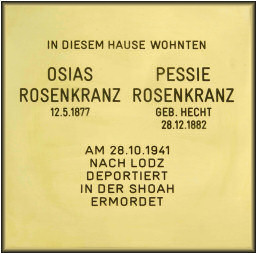 On May 4, 2011 the inauguration of the first Stone of Remembrance in the 18th district, for Pessie and Ossias Rosenkranz, took place in Bäckenbrünnlgasse 5.
Karl Homole, head of the district, gave a speech thanking the Association, which “shows more initiative than big associations”. He expressed his hope that more Stones would follow in the district, and spoke about his own childhood memories of Bäckenbrünnlgasse. 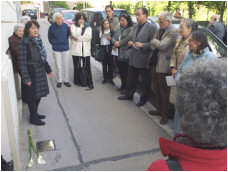 In her talk, Elisabeth Ben David-Hindler spoke about the development of the Association and the development of Vienna; where things have changed. “There is a new wind blowing in Vienna, but some people have not opened up their windows yet”. The Association’s initiative proved that there is a great need among the population to contribute to the Project. No-one would have guessed this previously.

In Bäckenbrünnlgasse, too, one lady present committed herself, as early as during the inauguration, to clean the stone regularly. It is from such ripples of cooperativeness and positive experiences that the Association draws its vigour.

The work of the Association is, last but not least, made possible by the great strength of the parent generation, having returned to Vienna in order to rebuild the city. 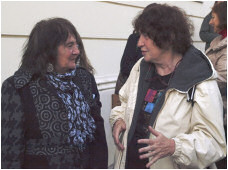 Erika Svoma, granddaughter to Osias Rosenkranz, gave a speech as a member of the family. Her family had owned the dwelling Bäckenbrünnlgasse 5 since 1920. But her grandparents moved in only later. The house was returned to its owners in 1949.

As for the events during the Nazi era, nothing but silence had been maintained in the family. She then tried to make up for this by doing research in the archives.

The family had tried to emigrate. It is only by a file in the State Archives that her grandfather has come to life for Erika Svoma. What is positive is that the son of Ossias und Pessie Rosenkranz now lives in the United States and has a large and flourishing family.