Inauguration of five Stations on the Path of  Remembrance through Brigittenau on September 28, 2012

The commemoration ceremony on Wallensteinplatz was attended by about 50 participants, and embellished by the music of the trio „Margaritkes“.

In his introductory speech, vice-head of district Mr. Pirker emphasized the importance of the project for the district.

Elisabeth Ben David-Hindler welcomed the family members, one couple having specially come from England, and outlined the work of the Association in its seven years of existence. She thanked all supporters and volunteers for making a vital contribution to the projects, now existing in as many as 14 districts of Vienna.

Ing. Gruber spoke about the fate of his parents and his uncle, and about how he found his way back to Vienna.

Irene Filip devoted a Stone to the parents of a relative by marriage. The parents shared the fate of a large group of people trying to get to Palestine via the Danube (Kladovo transport). They were stopped in Serbia and murdered by the Nazis near Belgrade.

Following the commemoration ceremony, the group walked on to the individual Stations. In Bäuerlegasse 29, Ing. Gruber showed us the windows of his former flat. He had grown up in the 20th district and was sent to England with a Kindertransport in 1938. It was then that he saw his parents for the last time. 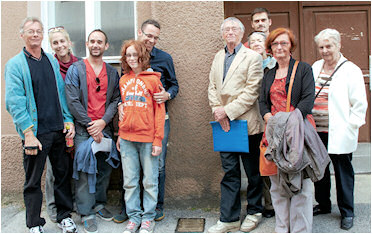 Four generations of the Fettner family gathered in Denisgasse in order to commemorate their ancestors. Mr. Fettner, aged 91, delivered a political speech and recalled the many other groups suffering from persecution in the Nazi era.

In Heinzelmanngasse 18, Sue Rutherford commemorated her grandparents and her aunt Clara. Her mother emigrated to England and rejected the German language, much to the regret of her daughter, who had grown up in England. But she had described the dwelling in Vienna with such precision that Sue Rutherford felt as if she was „coming home“.

In Staudingergasse14, a plaque on the wall reminds that 55 people were deported from this building and murdered. Special commemoration was devoted to two families. The owner of the dwelling is a committed supporter of the project and recorded a video especially for Ms. Winter, who for health reasons had not been able to come from Canada to honour her family. Ms. Czipke delivered an impressive speech about the fate of the two young women whose attempt to flee with the Kladovo transport failed.

In conclusion, the participants took turns to read out loud the names of all persons with last registration address in this building.