Solemn inauguration of three new Stations of Remembrance in Brigittenau on October 24, 2014

Peter Mlczoch of the Local Support and Coordination Service (Gebietsbetreuung) opened the event. He welcomed all attendents and acted as the guide through the programme. Daliah Hindler (voice) and Elisabeth Ben David Hindler (guitar) provided the musical accompaniment.

Herwig Pirkner, Vice Head of District, thanked the Association Stones of Remembrance for their long lasting cooperation in reappraising the district’s history. He called on everybody to raise their voice so that such thing could never happen again. District Councillor Mr. Zischek made the point that “each Stone of Remembrance is an important signal“.

Elisabeth Ben David Hindler welcomed the family members Marion Sipser from England, Astrid Mulholland from Australia and Gabriela Feigl from Vienna. She outlined the Association’s main activities and thanked the district for cooperation and generous support. 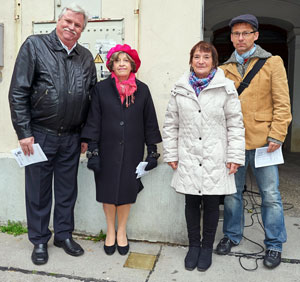 Marion Sipser commemorates her grandparents. Nathan and Regina Turteltaub were very modest, worked hard and enjoyed life in Vienna (nature, culture, coffee houses). Until in 1940 they were deported from here and murdered. The other members of the family lived all over the world. Marion Sipser is the only family member still alive.

Astrid Mulholland lives in Australia and commemorates her great grandfather. She has been doing research on her family’s history all over the world. She feels her visit to Vienna so positive because her grandparents have now found a symbolic home in Wasnergasse 27. Today, the family lives on three different continents.

Elisabeth Ben David Hindler spoke on behalf of Herbert Scholden who commemorates his aunt. He lives in the USA and is with us, though he could not travel, with all his heart. 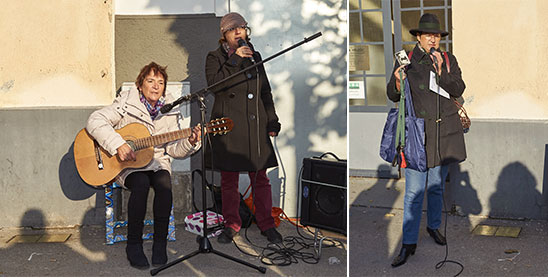 These Stones were initiated by Ms. Feigl. When she was a child, her grandparents gave her as a gift a baby doll named Kurt. They often talked about some Schulhof family. Ms. Feigl did some research via “A Letter to the Stars“ and came across the Schulhof family. By having the Stones placed, she has plucked seven persons from oblivion, and is very grateful for it.