Solemn Inauguration of the Path of Remembrance through Brigittenau

On October 21, 2011 the second part of the Path of Remebrance through Brigittenau was inaugurated on Gaußplatz, next to the new plaque marking the entrance to the Path. The entrance plaque was sponsored by the district.

Member of the Assocoation Ernst Fitzka acted as the guide through the event, which was framed by the beautiful music by Janina Schedy (accordion) und Hannes Guschelbauer (clarinet).

Head of district Hannes Derfler as well as several district councillors attended the inauguration. The head of district said that to him, the Path was like a mosaic of stones, which come together to form an overall picture. He assured the Association of his continuing support, and promised to sponsor a bigger entrance plaque, should such wish arise.

Kurt Cizek gave a speech in the name of the Socialist Freedom Fighters. It is due to his initiative that a Plaque for freedom fighter Fritz Hedrich has been incorporated in the Path. Mr. Cizek devoted a special part of his speech to the situation of Jewish pupils: they were forced to take upon themselves very long walks to school, were segregated in separate classes, or expelled from schools altogether.

Elisabeth Ben David-Hindler spoke about the new part of the Path. It includes, among others, a Station for the Association of Jewish Tradespeople, a plaque for the children’s’ outpatient clinic and daycare facility (Sonnentagesheim) in Augarten, and a plaque for the Synagogue in Kaschlgasse.

Klosterneuburgerstraße 71 is the location of the Station of Lilly Weihsmann. She spoke about her grandparents Ruchel und Daniel Thiemann, a picture of whom is to be seen on the new entrance plaque to the Path. Her grandfather was a carriage-driver and a popular Heurigensänger (singer in wine taverns). When the time of horse-drawn carriages was over, he worked as a taxi driver. He was a “genuine Viennese” (echter Wiener). She concluded by saying “Thank you, Liesl, you have brought my grandparents back to Vienna”. 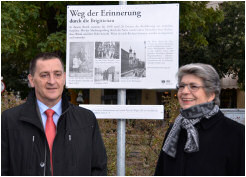 Ing. Martin Gruber also spoke about the situation of Jewish pupils in Vienna during the Nazi era. He himself went to school in Karajangasse, pointing out that in this school Jewish pupils could complete the school year and obtained their leaving certificates. He remembers a teacher rebuking some pupils for assaulting Jewish schoolmates.

The following walk along the Path made a first stop at the Station in Staudingergasse 6, where a plaque commemorates the former Chajes-Realgymnasium (secondary school). Wilhelm Jamnig, present headmaster of the school, gave a brief outline of the school’s cooperation with the Association. Daliah Hindler presented the information available, though very scarce, on former pupils and teachers.

The second Station visited was Wallensteinstraße 29, where Ms. Vybiral was awaiting us. The Stone for her father Max Benedek had been initiated by her two sons. She told several stories about her grandparents. Her grandfather, an excellent upholsterer, helped mending the defective workmanship of a Nazi collegue. The latter thanked her grandfather by saving him from deportation.

The concluding event was held in the Karajangasse-Memorial (see links, 20th district), located in Brigittenau secondary school, where Stones for 24 former pupils are inserted into the floor. Ing. Gruber spoke about his personal experiences in that school and stressed that one could forgive in order to disburden oneself, but that one should never forget.

Renate Prazak, representative of the school, spoke about the memorial. Its site is partly located on the grounds of a former Gestapo prison. Thereafter, the 24 names of the victims were read out loud by the school’s pupils. They also read out loud letters of surviving former pupils, who had been contacted as part of a school project.