On October 1 2010 the inauguration of the path of remembrance was celebrated solemnly on Gaußplatz. Some of the stations had already been set in the past years. They are a part of the path. Six stations were set this year, already existing commemoration plaques of the district were incorporated in the path and are described in the accompanying booklet.

Relatives of the Bettelheim family and the Eckstein family attended the event as well as numerous political representatives. Also the Israeli ambassador Aviv Shir-On participated in the inauguration. 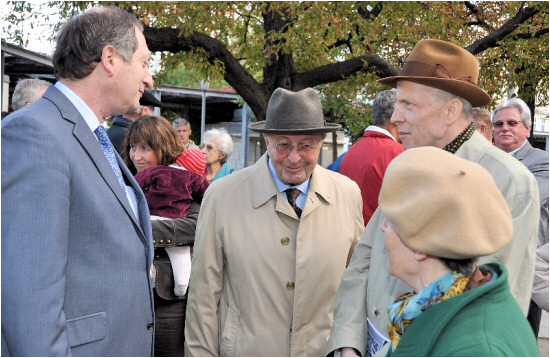 Head of the district Hannes Derfler highlighted in his speech the support for the Stones of Remembrance and expressed his respect for the work of the association. Then Kurt Cizek spoke as representative of the Socialist Freedom Fighters about the Jewish history of Brigittenau. The Jewish population there came mainly from the poorer social stratum. There were many Jewish cafes and shops in the district which shaped the townscape as well as cultural associations and a synagogue in Kluckygasse 11.

Elisabeth Ben David-Hindler welcomed all attendees and shortly complemented the historical explanations. She spoke about the association and thanked the relative for their arrival.

Tanja Eckstein, who had set a stone for her grandparents Clara and Alfred Freund spoke about their destiny in the Shoah. Her father Erwin Freund could escape to England from the concentration camp Dachau. However he wasn’t able to come for his parents. Both were deported to the Ghetto Opole and murdered in a concentration camp in 1942.

Wilhelm Bettelheim commemorated in his speech his relatives Rudolf Bettelheim, Gisela Bettelheim-Krauss and Friedrich Krauss. All three lived and worked in Avignon after their emigration.

They were murdered in Auschwitz. The event was framed by the music of the trio Esther Jelinek, Christoph Kögler and Daliah Hindler. 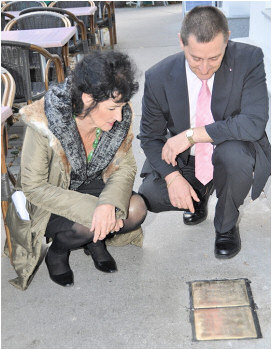 Many people took part in the following walk along several Stations of the path. Tanja Eckstein spoke at the station for her grandparents on Gaußplatz 7. (Photo Eckstein) Then the station on Gaußplatz 6 for the soup kitchen of the Viennese Jewish Community and the library of the association ‘Aktion Jüdische Jugend in Not’ for poor Jewish adolescents was visited.

The station in Perinetgasse had already been set in 2009 for Pessia Feder. At Brigittenauer Lände 20 Wilhelm Bettelheim spoke a few words. A commemoration plaque for the famous author Joseph Roth is placed in Wallensteinstraße 14.

The district put up a plaque in Staudingergasse 9 for the author Else Feldmann. The next station was Jägerstraße 26, where a Jewish butchery had been whose owner was deported.

Finally the solemn inauguration of a plaque took place by the dwellers of Streffleurgasse 14 who had initiated it for the former Jewish tenants. All the names were read out and for each person a candle was lit.