Inauguration of four new Stations of Remembrance in Alsergrund on September 25, 2011

The inauguration of the new Stations was held in Arne-Carlsson-Park.
Helene Kluger–Langer had come from England and Susanne Blatt from the USA to honour their grandparents, they both delivered very touching speeches.

Susanne Blatt told the story of her parents and sang a song she had been taught by her mother. [Download speech]

Head of district Martina Malyar honoured the event with words of dedication and warmth, and offered her welcome to the guests. Elisabeth Ben David-Hindler spoke about the development of the Project, having brought to the fore history already in many locations of Alsergrund. The ceremony was framed by the wonderful music of the „Margaritkes“. 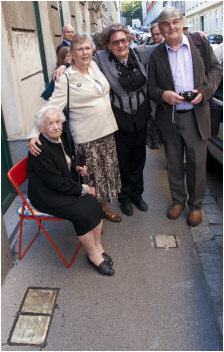 The participants then jointly visited the four new Stations.

In Tendlergasse 3, Ms. Annie Schödlbauer, aged 93 and yet attending the event, showed us the windows of Helene Kluger-Langer’s grandparents, who had been vis-à-vis neighbours to her. Though she had not known them personally, she had seen them reading in Arne-Carlsson-Park time and again.

Liesl März rose to speak, too. Her mother had played an important role in maintaining communication between Helene Kluger-Langer’s mother and her family. All the letters were circulated through Switzerland, her own refuge. 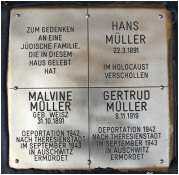 In Canisiusgasse 20, Elisabeth Ben David-Hindler told the story of her family on the mother’s side. Her mother Edith, having fled to England at the age of 18, tried very hard to obtain job and visa for her parents. When she had finally got hold of all the papers required, it was too late – the war had begun.

A Stone was set for the Müller family, unfortunately very little is known about them.

Diana und Eva Huppert grew up in Venezuela, the country their father had taken refuge to. In Liechtensteinstraße 95, they told the story of their grandfather Isidor: born under very poor conditions, he worked his way up to become an engineer.

In Berggasse 14 was the home of Emma Schwarz, grandmother to Susanne Blatt. It was there that Ms. Blatt passed her last days in Vienna when she was a one-year-old child She spoke about the tragic farewell from her granny, pretending to be in safety but knowing deep inside that she woud not see her family again.