Inauguration of the Stations of Remembrance in Alsergrund on May 4, 2008

The Rossau is a quarter in which half of the population before 1938 came from Jewish families. Our opening event took place in Rossau in front of the Servitenkirche (church).

Many relatives attended the event, which was very important for them. Three families even came from Israel.

Martina Malyar, head of the district, who sponsored a Stone of Remembrance herself, spoke during her passionate speech about the importance of dealing with the past. “Repressing and forgetting used to be the way in which our politicians handled the past. Thus victims were being made into victims again and I get the impression that the actors were hardly held accountable . We, as younger generation, have to feel responsible to take our share. For me as representative of that generation that is not an obligation, but a want.”

Peter Schwarz of ESRA (consulting and treatment centre for survivors of the holocaust) referred to the ‘Stones of Remembrance’ in his speech as “particularly valuable contribution to dealing with the crimes that were committed in this city, because dealing with the past is the base and result of the project” 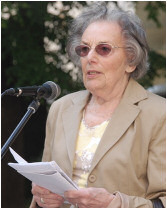 Franzi Heidenreich told the story of her mother. Regina Rosenzweig wasn’t a political person and she only recognized after the ‘Kristallnacht’ how life threatening the situation was. She wasn’t able anymore to get the required papers to leave the country. Therefore it wasn’t possible any longer to leave Austria. Franzi Heidenreich, who 15 years old, was able to escape to England and even found herself a job as housekeeper with the aid of friends.

In one of the last letters Regina Rosenzweig wrote to her daughter: “Schwalberl, du bist mir aus dem Nest gefallen.” (Swallow you fell out of my nest). 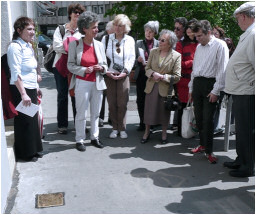 Vally Steiner, (second from the left) on Grundlgasse 5, in front of the dwelling in which her grandparents and her father lived.

Vally Steiner, grand daughter of Valerie and Heinrich Steiner explained that her father Herbert Steiner fled at the age of 15 with a friend via Holland to England. His parents neither had the financial means nor did they, in spite of intensive efforts, find a country that would accept them.

Herbert Steiner could get over the pain that he hadn’t been able to save his parents. He dedicated his life to dealing with the past and founded the ‘Documentation Centre of Austrian Resistance’. Vally Steiner is named after her grandmother.

Sholem sholem was the last song by the duo ‘Sholem Aleychem’ which elated everyone with their beautiful music and invited the attendees to sing along.

The subsequent walk was exceptionally touching. At every station relatives talked about the fate of their loved ones. Ariel Avriel-Sheffer recited the Jewish mourning prayer for his grandparents and his aunts. 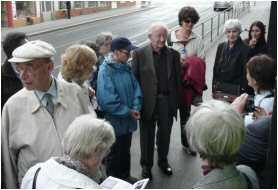 Walter (Ephraim) Blotner in the middle, on his right his daughter and his wife in Lichtensteinstraße 73. Mr Blotner born in 1921 lived with his parents and his sister in this house. He managed to escape at the last moment. 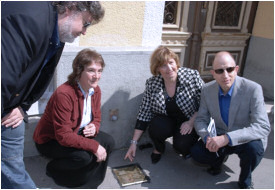 Ariel Avriel Sheffer (on the right) with Martina Malyar, head of the district, Elisabeth Ben David-Hindler and Albert Slavik from the district culture commission in front of the house on Grünentorgasse 19, where three of his grand aunts lived.