The inauguration was attended by family members from England and Austria, as well as representatives and inhabitants of the district, and friends of the Association.

The Avanim trio’s musical performance was an embellishment to the event again. Elisabeth Ben David Hindler bode a hearty welcome to everybody present. In her speech, Deputy Head of District Momo Kreutz highlighted the great importance of taking a stand and remembering in today’s world. “We must never forget and must work for such atrocities never to happen again.“ Elisabeth Ben David Hindler gave a brief introduction on the Association, and warm thanks for the great commitment and participation to the Viennese population. She also expressed thanks to the many institutions providing financial support.

Peter Bank and his family commemorated his grandparents. He was five years old when his mother, his brother and he himself took flight.At that time, his mother knew very well that she would never see her parents again. Cantor Mr. Lerner then sang the Kaddish. We then went on to visit the other Stations. 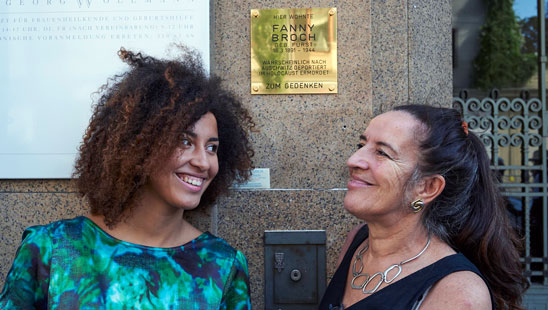 Maria Fialik got to know the family of the younger daughter of Anna Biss, Lilly de Sohr, in Chile, and did the research on her grandmother.

Peter and Bobbi Rosner commemorated their relatives. Peter Rosner read out a message telling about the life of Heinrich and Paula, on behalf of Barbara Pauline Rosenberg Loss and Henry William Rosenberg.