For the numerous family members, but also for all others who attended the event it was very touching to commemorate the people that lived here, listen to their stories and see their stations. Relatives came from England, the USA and Israel. Mr Klein, who is 93 years old and lives in Vienna also participated in the inauguration.

People living nearby spontaneously came from their apartments or watched from their windows.

Martina Malyar, head of the district who had sponsored a Stone of Re-membrance herself, spoke about the important significance of commemoration as a part of dealing with the past.

Elisabeth Ben David-Hindler explained that her grandparents, for whom the first stone in the district had been set 2005, looked from their windows on Glasergasse and that her mother went to school in Glasergasse.

Elisabeth Ben David-Hindler explained that her grandparents, for whom the first stone in the district had been set 2005, looked from their windows on Glasergasse and that her mother went to school in Glasergasse.

Frank Beck told the story of his father who fled to France in the hope of being able to save his family. He fell into the hands of the Nazis there and was deported from Drancy to Auschwitz.

Susanne Schönbrunner who organised a family reunion with relatives from all over the whole world on the occasion of the stone setting, told the story of her grandmother and her children. Two of them had been looked after by someone else and she only saw them before their transport to Lodz.

A highlight of the event was the musical performance by the young trio Christoph Kögler, Daliah Hindler and Esther Jelinek, whose songs moved some of those in attendance to tears. A big group partook in the following stations visits. 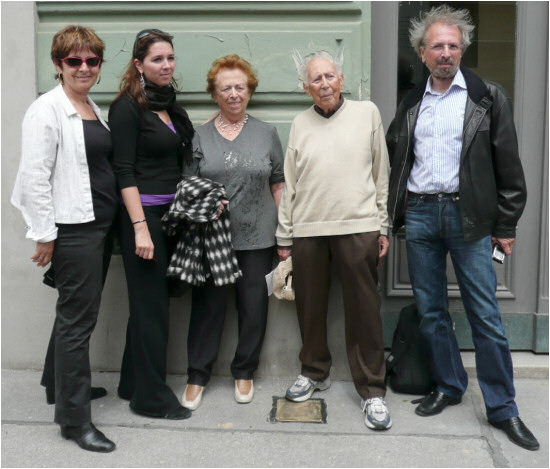 The Klein family at their station in Dreihackengasse

Heinz Klein (2nd from the right) told the story of his grandmother Marie Hilfreich and his favourite cousin Olly (Olga Teuer), who was brought up by Marie after the early death of her mother. Olly didn’t want to leave her grandmother and so they stayed together until their bitter end in Theresienstadt and then in Auschwitz.

A booklet to the second part of the Stations of Remembrance is available from us or at Südwind- Buchwelt, 9, Schwarzspanierstraße 15