A group of people gathered in the morning in Fechtergasse 19 to inaugurate the plaque for the Wineroope family. 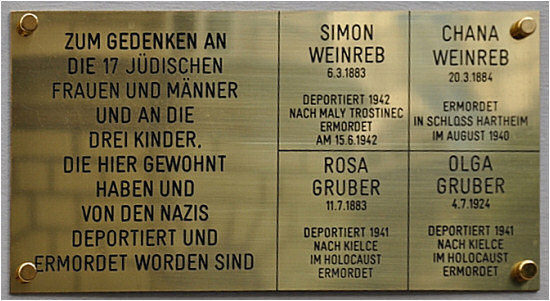 The whole family had come from England and Israel to commemmorate Joe Wineroope’s parents Chana and Simon Weinreb. Elisabeth Ben David-Hindler spoke introductory words and welcomed all people present in German and English.

All of the other speeches were given in both languages. First Martina Malyar head of the district delivered a speech in which she thanked the Wineroope family for returning to Vienna. She pointed out that she felt honoured to be able to welcome the family in Vienna. Then she built the bridge to today’s district policy, in which she as head of the district referred to the daily fight against racism as important. Finally she thanked all the members of the association Stones of Remembrance and in particular Liesl Ben David-Hindler, whom she referred to as ‘the treasure of the organisation’.

Then Elisabeth Ben David-Hindler spoke about the association, which already works in 8 districts and set stations for about 700 people. Special thanks went to all the voluntary helpers like Alfred Pilar and Gertraud Sisa who regularly take photos of the inaugurations. Joe Wineroope said that 71 years ago he saw his parents for the last time in this building. It is important for him that today there is another Vienna, in which people like his parents are not persecuted only because of their religion.

He thanked Liesl (Ben David-Hindler) and Martina (Malyar) for having participated in building the Vienna of today.

Then the whole family read out the kaddish (mourning prayer) for Simon and Chana Weinreb. 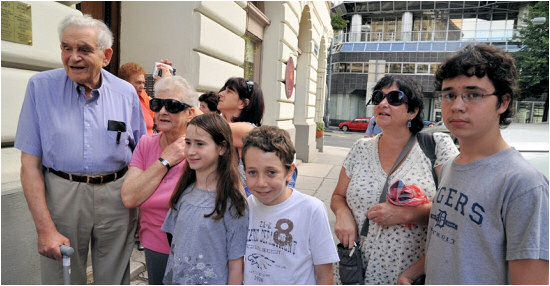 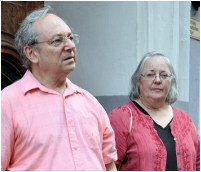 At the second station in Tendlergasse 11 Anthony Gimpel spoke about his grandmother Rosa Chaje Gimpel, for whom the stone had been set. She lived with her husband Jakob in the dwelling, where their son Josef was born. Rosa had a delicatessen shop in the first district (Tuchlauben). Jakob died of a heart attack when Josef was only 11 years old.

After that a hard life began for the family. After the Anschluss of the Nazis Josef could escape first to Zurich and then to England. Rosa Chaje wasn’t able to escape and was deported to Theresienstadt in 1942. She was murdered in Auschwitz in 1944. Anthony Gimpel spoke about his connection to Rosa Chaje which also shows in their resemblance.

The third station was initiated by the house owner Andreas Nader for two former inhabitants. Unfortunately it couldn’t be visited during the walk.