Ceremonious unveiling of the Stone of Remembrance 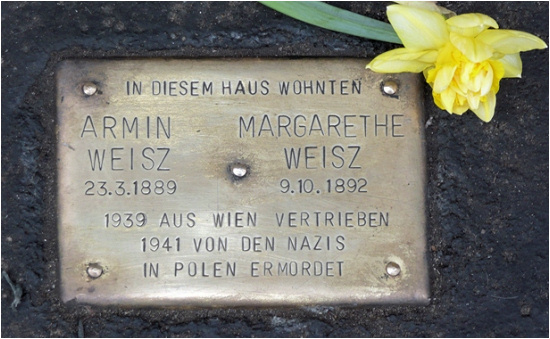 In this house resided

On Saturday, 19th November 2005, the Stone of Remembrance for Armin and Margarethe Weisz was unveiled at 3 o’clock p.m. The ceremony took place under the honorary presidency of district governor Martina Malyar, who had supported the setting of the stone and managed to fix a date for the ceremony during this year of commemoration. Armin and Grethe Weisz had lived in this house for twenty years before they were driven out of it by the Nazis. Their two children, Ditta and Fritz, aged 18 and 15, succeeded in getting to England and Palestine safely.

Armin and Grethe fled to Hungary, where they were put in an internment camp, then deported to Poland and – along with a large number of other people – murdered by an SS squad, after they had been forced to dig their own graves. Ephraim Levanon, Armin and Grethe’s son, aged 82, came to Vienna with his wife, his two sons, and his seven grandchildren, in order to be present at the unveiling, an event of such great significance for all people involved. In his speech Mr Levanon pointed out that the day of the ceremony was one of the happiest days in his life.