On May 13, 2012 we celebrated the largest inauguration of the year, comprising 15 new Stations on the Path of Remembrance through Leopoldstadt. This time, the sun was kind to us.

Many guests had travelled all the way from USA, Israel, England and Germany to commemorate their loved ones. The event was provided a dignified frame through the music of Margaritkes (Daliah Hindler, Joshua Korn und Christoph Kögler). Head of district Gerhard Kubik welcomed the numerous visitors and pointed out that the district had supported the Project from the very beginning. Cultural councillor Kresimir Mladensich spoke about the district’s Jewish history. Elisabeth Ben David Hindler introduced the guests one by one. It was only so many years after the Shoah that her generation, which is also the generation of many a guest, could take up the commemoration work so meaningful to their families.

In the course of the day, we visited most of the Stations devoted to the guests’ relatives, and the visitors were deeply moved. Jackie Young (England), born as Jonas Spiegel, commemorated his mother and his grandfather, whom he had never known. His mother Elsa Spiegel had sent him to an orphanage before she was deported, from there he was deported to Theresienstadt.

Kurt Gutfreund, too, survived the Theresienstadt concentration camp. He saw his father Heinrich Gutfreund for he last time when aged four. He wrote to us: „It was a wonderful event. My son visited my father’s, his grandfather’s stone the next day and he realized that Sunday,13 May, was his birthday.”

Elfriede Brunner’s father Otto Herlinger, as a Jew, had to leave his home in Sudetenland and move to Vienna. She saw him for the last time as a five-year-old girl. She wrote us a letter thanking for “the wonderful touching ceremony and for the walk through the streets where my father walked.”

In her speech, Gaby Weiner pointed out that we were having a mourning ceremony, but at the same time a welcoming celebration for her family members, who we had brought back home. She and cousin Alec Spencer commemorated their grandmother and her sister. 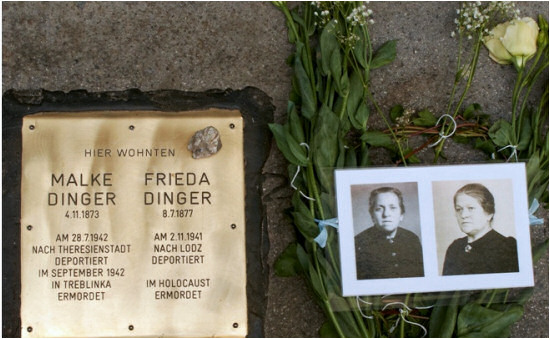 Sally Mc Nichol has been working for a long time reviewing the history of her mother’s family, to ensure that no one would be forgotten. Now she came with her brother Martin Topping and her niece, to inaugurate the Stones of two aunts and uncles of her mother.

“We returned to Israel Tuesday, overwhelmed with emotions, and we write to thank you for all you have done, starting with your outstanding initiative through endless efforts and devotion all of which made this memorial event so meaningful to all its participants.
Sunday’s event from start to end was moving, exhilarating and well organized.
By taking part in this ceremony you enabled us to show great respect to our grandparents at the very point, the threshold of their home, from where they were forced to leave and were taken, stripped of any kind of dignity, denied all basic human rights, dragged and pulled to their voyage of misery, and finally extermination.
For your efforts and good work you deserve great and hearty Yishar Koach!”

Marc and Terry Roberts and Andrea Burkenroad had arrived from USA to commemorate their grandparents. In view of the serious illness of their mother, we had put up the plaque already in December 2011. So, the mother could still see pictures of it. 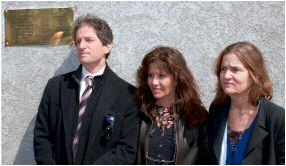 It has been of great importance to Rachel Galili to commemorate the relatives of her father. She also spoke about her parents meeting in Siberia after the Shoah, and about the endless efforts of her father to make a return to Vienna possible for him and his family.

The concluding event was held in front of the dwelling of Barbara Zeisl-Schönberg’s grandfather, who had been owner of the former Café Tegetthoff. She said that these Stones were of great importance to her. Now, passers-by would commemorate her grandfather. He had written, in his very last letter to her father Erich Zeisl, how happy he was about her having been born. 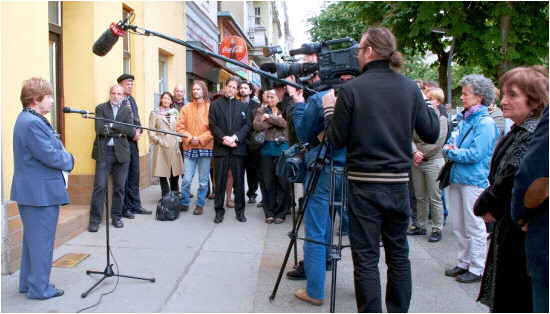 A week after the event, a TV report on the Stones of Remembrance was broadcast in the Austrian programme „Heimat, fremde Heimat“.

An accompanying booklet to the 7th part of the Path of Remembrance is available.