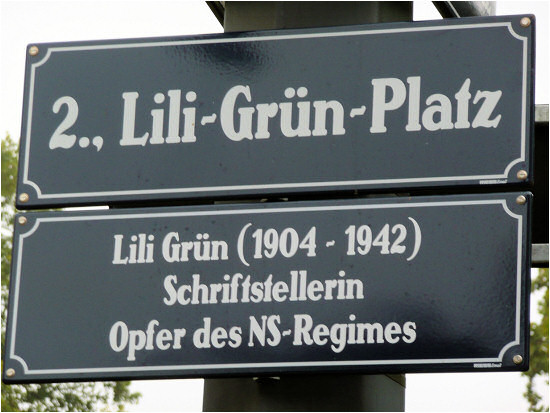 Unfortunately the weather didn’t quite cooperate on this May 14th, 2009 for the official inauguration ceremony of Lili-Grün-Platz (near Augarten, corner of Klanggasse, extended Heinestrasse). But despite the constant rain and frosty temperatures, over 40 participants persevered to commemorate Lili Grün through the naming a square in her honour.

The initiative for the square stemmed from the activities of the “Stones of Memory” Association. When attending a literture event the previous year, Association Director Elisabeth Ben-David-Hindler mentioned that there were still no sponsorships for some memorial stones. Discussion led to Lili Grün by chance.

However, those at the bookstore in Rotensterngasse were not satisfied with just financing a memorial plaque: they wanted to resussitate the life and work of Lili Grün which had been long forgotten after her murder near Minsk in May 1942. In a letter to the District Council, they suggested naming a square or street after the author. This was approved the following autumn (despite votes against by the liberal parliamentary group) and a resolution was passed.

The ceremony to open the square was moderated by the Chairman of the District Cultural Commission, Kresimir Mladensich. The first speaker was Gerhard Kubik, District Chairman, who underlined the district’s special interest in upholding Leopoldstadt’s Jewish traditions.

Dr. Elisabeth Ben-David-Hindler then briefly outlined the activities of the “Stones of Remembrance” Association and the history of the memorial stones at Jura Soyfer’s house that are dedicated to remember forgotten Jewish authors.

Univ. Prof. Dr. Murray Hall, who had intensively researched Lili Grün as part of his history of the Zsolnay Publishing company, gave a brief lecture on Lili Grün when she was a young author at the renowned publishing house , and recounted the efforts by the chief editor to help the her achieve a breakthrough, depite her struggle with a lung illness.

Kurt Lhotzky then briefly explained how the initiative for naming the square came about. Andrea Lhotzky read a letter from the German scholar Anke Heimberg, who is currently responsible for the new edition of the long-forgotten novel “Herz über Bord” by Lili Grün under the new title “Alles ist Jazz” at Aviva-Verlag. He noted that Anke Heimberg has also succeeded in closing a whole series of biographical gaps that previously existed with regard to Lili Grün’s life and work.

In the autumn of 2009, Lhotzky’s literature buffet presented Lili Grün’s book “Alles ist Jazz” with the support of the district. Anke Heimberg came to Vienna for this purpose and took the opportunity to report on her new findings about the life and fate of Lili Grün. This event can rightly be seen as a precursor to today’s ceremony on this May 14th.