Despite rain and cold, the ceremony on May 18, in Haidgasse 3, was attended by countless family members from Australia, England, Israel, Switzerland, the USA and Austria, and by many other interested persons. The Avanim trio opened the event with the song Donna, Donna and went on providing a very special musical programme. Peter Mlczoch acted as the guide throughout the inauguration.

Head of District Karlheinz Hora opened and closed his speech with the words „Niemals vergessen“ (“never forget”). He emphasized that persecution, expulsion and ghettoization had happened here in Leopoldstadt. For this reason, commemoration was ever so important. Peter Schwarz, too, emphasized the importance of the Stones in that they facilitate public debate of history. He then appraised the work of the Association, “a project with the commitment of individuals spreading out to a wide range of people”. The Stones are a reminder in the present as well as for the future. Elisabeth Ben David Hindler welcomed, from the bottom of her heart, all families, initiators of Stones and Plaques and all friends, and thanked all institutions for their financial support.

Irv Adler said he had known nothing about his grandmother for a long time, his mother being unable to speak of the horrible events. Mr. Adler found numerous letters written by his grandmother to his mother in the years 1938-1941, packed in a suitcase with a pink ribbon. These letters allowed him a glance at the nature of his grandmother as a person. Ditta Urmacher commemorated her father and grandfather. She described her memories of her father in Springergasse as a four-year-old. He was such a lively and a very sensitive father, who sang and played the mandolin. During her speech, she sang the songs “Mein Hut, der hat drei Ecken“ and “O du lieber Augustin“. The farewell before the soldiers collected her father from the flat is still very vivid in her memory, too. She is very pleased by the Stones and concluded with the words “We did not forget you. Sleep in heavenly peace”.

Martin Perl (grandson of Leopold and Martha Perl) described how many family members had arrived from various countries and continents in order to attend this solemn inauguration. He went on to speak about the life of his grandparents. Following this event, we all went on to visit the individual Stations.

Gerhard Raninger commemorating his grandfather. The only source of information on the life of Rudolf Schwarzbatel is his aunt Martha Raninger, aged 91 and yet attending today. 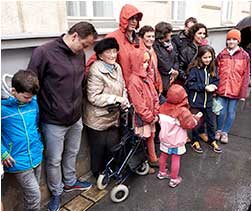 Members of the Kohn family from England, Israel, the USA and Vienna

Some members of the Kohn family lived at this address up to 1941. Elisabeth Ben David Hindler commemorating Chana Hindler (wife of her grandfather’s brother) 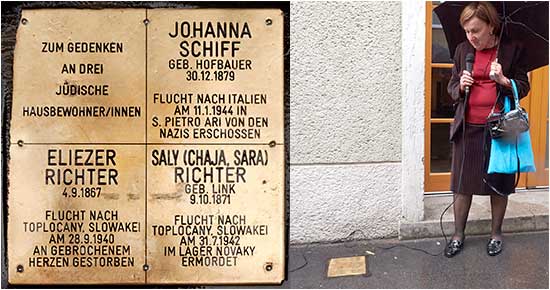 The grandparents used to live here, they owned a cap factory. Eliezer Richter was vice president of the Synagogue.

These Stones were co-financed by the owner of the dwelling and by respect.net.

Susanna Perl and Martin Perl commemorating their uncles and grandparents.

The plaque will be fixed on completion of the building’s renovation only. Ilan Kabiljo, owner of the dwelling, initiated and financed the plaque. 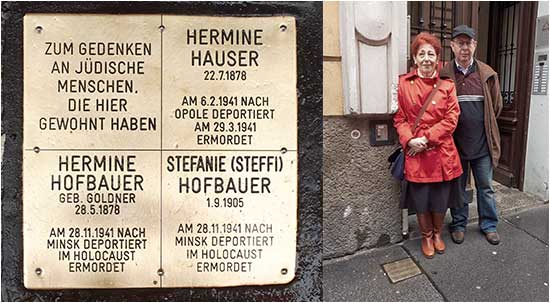 Steffi and Peter Bollag commemorating their great-grandmother and great-aunt.

We used the lunch break to warm up in Café Einfahrt, where August Holler and his wife served us delicious food and drinks with loving care. 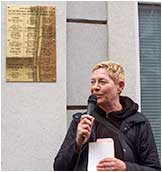 When the Greens moved into the building, they did research and initiated the plaque on the wall. It commemorates former inhabitants who were deported and murdered. IKG as the owner of the dwelling financed the plaque. 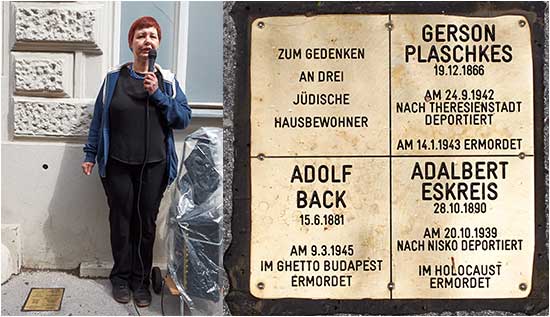 Irv Adler commemorating his grandmother who was brought back to live for him through the many letters she had written to his mother in the years 1938-41. Vally Steiner reading one of the letters. 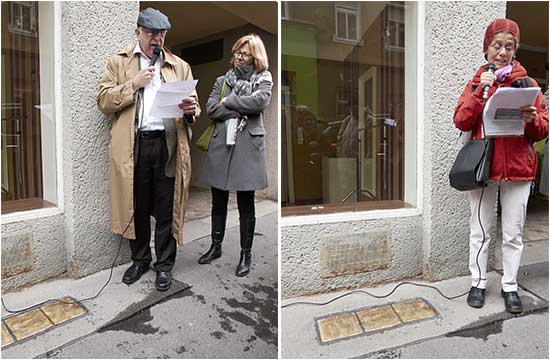