Exhibition „Path of Remembrance through the Leopoldstadt” 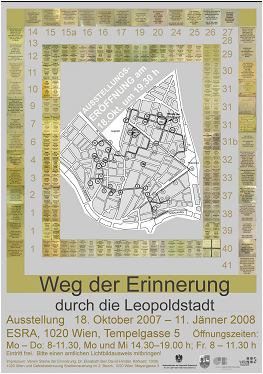 In November 1998 both local coordinating institutions in the second district set up 15 pillars in front of buildings that were connected to former Jewish culture before it was destroyed by the Nazis 1938. The project’s aim was to resurrect the Jewish culture in a public space for several weeks and make it visible again.

The ‘Path of Remembrance through the Leopoldstadt’ follows, through many stations the ideas of this exhibition.

The exhibition which was shown in ESRA (consulting and treatment centre for survivors of the holocaust) connects ten of the stations with the stones of Remembrance and explanation plaques that are now set in the pavement there. Each place is accompanied by a text that explains the situation before and after the Holocaust and sometimes also eye witness accounts.

Part of the exhibition is the commemoration of destroyed synagogues and dispelled members of the Jewish communities. For 45 000 people the assembly camp in Kleine Sperlgasse 2a was the last station before they were deported. Also remembered are Pupils that were forced to leave their schools in May 1938 as well as writers that were murdered. The “Path of Remembrance” has significantly changed public space.

The exhibition was initiated by the association “Stones of Remembrance” and the local coordinating institutions (Gebietsbetreuungen) in the Leopoldstadt.