5th part of the Path of Remembrance through Leopoldstadt

On May 2 2010 the inauguration of the fifth part of the Path of Remembrance through Leopoldstadt took place at Karmelitermarkt (Viennese market). Many interested Viennese as well as relatives from foreign countries attended the event. Family members arrived from the USA, Australia, England and Israel. 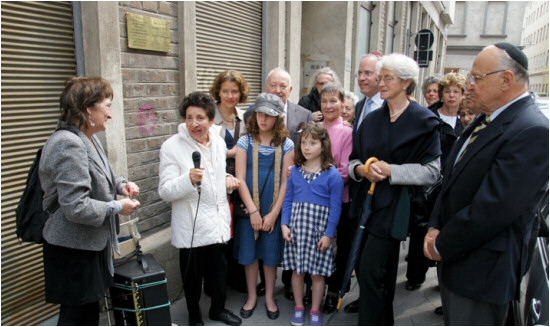 The program was moderated by Peter Mlczoch of the Gebietsbetreuung (local support and coordination service) in the 2nd district. Most of the speeches were given in English and in German due to the numerous foreign visitors.

Chaim Eisenberg, Chief Rabbi of the Jewish community in Vienna gave a spontaneous speech. He highlighted the great importance of the attendance of Jewish and non-Jewish Austrians at the event.

Sonja Kato, representative of the Viennese city council passed on greetings from the mayor. As tenant of an apartment nearby the project is very important for her.

Peter Schwarz of ESRA (consulting and treatment centre for survivors of the holocaust) highlighted the importance of commemoration and recognition of the pain for dealing with traumatic experiences.

Elisabeth Ben David-Hindler welcomed all relatives personally and thanked all supporters, individuals as well as institutions for their contribution: together we make history ‘from below’. She particularly underlined the valuable activities of single initiatives and concluded with the memory of her parents: ‘I know that they stand behind us. They are proud of us and they want us to be happy.’

Several relatives spoke subsequently. Rachel Berger from Israel spoke about her connection to her home country. Jane and Ros Merkin from England, who commemorated their grandparents and an uncle highlighted the topicality of the phenomenon of exclusion.

Waltraud Barton is an initiator from Vienna, who sponsored several stones. She spoke about Malwine Barton, for whom she initiated the first stone and about her own commitment to commemoration work.

Zeev Engler from Israel commemorated his grandfather. He spoke about his escape to Palestine, which he had to face with his mother as a child. Yiddish and Hebrew songs of the trio Esther Jelinek, Christoph Kögler and Daliah Hindler, framed the event. 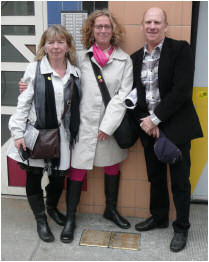 The following visit of the stations was attended by many people. Kevin Davidson had arrived from Australia to commemorate his grandparents and his uncle, who was murdered as a child. (In the photo with Jane and Ros Merkin) He explained how hard it must have been for his mother and his aunt – then children – to leave their parents and how sad for his grandparents to let them go.

In Floßgasse 9 Rachel Berger dedicated a mother’s day poem to her mother and Mr Engler recited the Kaddish the mourning prayer for her family and the Ranzenhofer family. Thea Valman dignified her great aunt in Franz-Hochedlingergasse 4:’All my family members have a grave somewhere in the world, apart from her. I am the only one who still remembers her.’
Walter Grunwald, who came from the USA to Vienna at the age of 90 enthralled everyone with the recollections of his childhood and his parents’ café in Hollandstraße 8.

In the afternoon there were more touching speeches.

Edith Breskin and Kurt Eichner had come from England with their children and grandchildren to prepare a special celebration for their mother and aunt.

They were deported from Große Mohrengasse 38. Zeev and Uri Engler from Israel commemorated their grandfather in Blumauergasse 22. Zeev Engler lived there as a child.

Both of the stones in Große Sperlgasse 28 had been initiated by tenants for two families that allegedly had no living family members. What a great surprise for Frank Feiner, who set a stone for his grandparents two years ago, that one of the stones was dedicated to the sister of his grandfather. Meanwhile the initiators have already invited him. 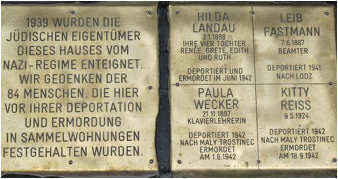 At the end of the ceremony was a wonderful celebration in Schwarzingergasse 2. Tenants had done extensive research on the former Jewish families. The big group that also joined the walk in the afternoon came to enjoy a touching musical performance. Elisabeth Neske (Cello) and Johanna von der Deken (vocals) executed a poem (set into music) by Paul Celan.

Afterwards the owner of pizzeria Mari invited everyone for a glass of wine.