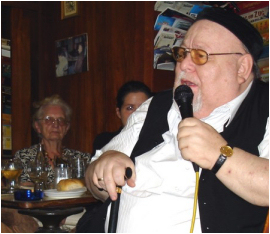 The inauguration of the new stations was held during a winter storm.

The atmosphere in Cafe Sperlhof allowed the numerous family members to speak very personally about the destinies and lives of their murdered relatives. This event also made it possible to speak about the personal feelings connected to these tragic life stories. They honoured them by creating ‘Stones of Remembrance’ in their name.

Head of the district, Krejsimir Mladensich, highlighted the commitment to and support of the  district for the ‘Path of Remembrance’ and the huge interest in the continuation of the project.

The ‘teatro caprile’ accompanied the event by performing scenes on two of the stations. The scene on the station Augarten dealt with the prohibition of access to parks for the Jewish population. The second performance concentrated on murdered Jewish authors. Due to the storm, the performances were moved inside.