Solemn inauguration of Part 9/B of the Path of Remembrance in Leopoldstadt on Sunday, 19th October 2014

About 100 people – family members from Australia, Israel, USA and Austria, friends of the project and other interested persons – came to the Grätzelzentrum (neighborhood centre) on Max Winterplatz 23. Peter Mlczoch opened the event and acted as the guide through the programme. The Avanim trio provided the musical embellishment.

District Councillor Kresimir Mladensich spoke about the flourishing Jewish life before World War II, and about the forceful deportation and emigration. “Today’s children ask what happened, and they have the right to know. The Stones of Remembrance bring to the light what has been hidden in the dark“.

A special message of greeting from Dr. Heinz Fischer, Austrian Federal President, was then read out in German and English

Elisabeth Ben David Hindler bode a very warm welcome to the family members and introduced them one by one. She went on to illustrate the manifold meaning of the Stones with a power point presentation. The Stones give their name back to the persons murdered, and welcome them at the place where they lived. For the relatives, the Stones are symbolic tombstones. People in Vienna can get involved actively in commemoration, as when dwellers carry out research and initiate Stones by themselves. The Stones make the past visible, and public space is changed accordingly.

Elisabeth Ben David Hindler spoke on behalf of Silvia Bauer, who commemorated her grandmother Marie Krakauer. So far, the only memento had been a farewell letter. Amiram Katz spoke on behalf of the 19 family members, including even great-great grandchildren, who had travelled all the way to Vienna to commemorate his grandparents and an aunt, murdered at the age of 14.

Dov Stahl came from Israel, and Lewis Stahl and family from USA, in order to commemorate their grandparents.

Ron Gibert from Australia, and Debbie Aidan and Carol Shotts from Israel commemorated their grandparents. They thanked Christian Gebhard, who lives in Vienna, for his initiative. Christian Gebhard came across them when doing research on his family, and contacted them. He initiated the Stone for Josef, the second husband of his great grandmother Adele Blau. Elisabeth Ben David Hindler spoke on behalf of the Urmacher family, who commemorated their grandfather and great grandfather in Springergasse 13.

We then went on to visit four new Stations. 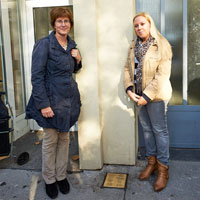 Sivia Bauer commemorating her grandmother jointly with her niece.

Liora Hanoch read out her speech in Hebrew, for her grandchildren to be able to understand everything.

The Stahl family from USA and Israel commemorated their grandparents.

Christian Gebhard commemorated Josef, the second husband of his great grandmother. Ron Gilbert, Dabbie Avidan and Carol Shotts commemorated their grandparents. Their parents, living in Australia, could not be physically present but were with us in spirit and heart.