A very touching inauguration took place on the new Heineplatzl. Head of the District Gerhard Kubik called the event the dedication of the square.

Numerous stones were set due to requests of those affiliated with the project. Many of them were present at the inauguration. Visitors came from Canada, the USA, England and the Netherlands specifically for this event.

Vienna’s culture councillor Andreas Mailath-Pokorny and Head of the District Gerhard Kubik spoke at the inauguration. Beautiful music was provided by the group Maniak.

Sitting in the middle of the picture is Hilda Stöhr, who came at the age of 94 from Canada to participate in the event, which was very important for her. She used to live with her parents in Ybbsstraße 5. Her daughter Valerie Schirmaier, who stands to her left gave a speech. The Stones of Remembrance in front of her grandparents’ house are an important contribution to her family story. She expressed her gratitude and thanked everybody included in the project.

Maria Haas explained in her speech how difficult the research on her grandparents’ destinies had been and spoke about the void/empty space in her family story.

Wolfgang Punz told the life story of his grandfather Dr. Siegfried Lateiner whose name disappeared from Central Europe when he was murdered.

The following walk along the new Stones of Remembrance was very touching. The affiliated spoke near ‘their’ stones about their loved ones and their destinies. 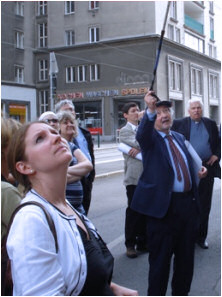 Otto Hutter shows with his cane, the place where windows of his former residence had been, out of which he looked with interest on the billboards for Persil that were on the side wall of the house opposite his. Later there was a frightful sight to see when the slogans that the Nazis shouted during their torch marches also hung from the closed windows.

Mr. Hutter came to Vienna with his children and grand-children so that through this visit they could learn and understand a chapter of their family history.

The parish from the St. Johann Nepomuk Church and their Priest Konstantin Spiegelfeld commissioned two „Stones of Rememberance“ for the church which was especially noteworthy for everyone.

Priest Konstantin Spiegelfeld explained that he had spoken about the Stones of Rememberance and their meaning during two masses. It was afterwards that people came to him whose ancestors had come from Jewish families.

The text on both stones says, „Taking responsibility for history, we memorialize the Jewish population.“ Naturally, those born after this horrible time are not responsible, but they have the responsibility to talk about it. The Stones of Rememberance can also be found on the homepage of the parish.
www.pfarre-nepomuk.at