On a sunny day, the solemn inauguration of 11 more Stations of Remembrance took place on May 5, 2013 in Haidgasse 3. Attending were head of district Karl-Heinz Hora, several district councillors, family members and many supporters of the project. Peter Mlczoch acted as the guide throughout the ceremony in a professional, friendly and relaxed way. All participants were deeply touched by the musical contributions of the trio Margaritkes trio. Dorothea Scholl, a family member aged 97, joined in singing each and every song.

Peter Mlczoch welcomed all family members. In his subsequent speech, head of district Mr. Hora commemorated the horrendous terror of World War II. Emphasizing the importance of the Stones of Remembrance, he concluded with the words “never forget”.

Vally Steiner read out a message of greeting from Elisabeth Ben David Hindler, who was not able to attend the event for health reasons. Ms. Steiner proceeded to report on the Association’s work in 14 districts of Vienna, with a focus on the 2nd district, where as many as 165 Stations have been installed. She thanked all institutions for their financial support, and the numerous volunteer supporters – without them, the project would not have been possible.

Dorothea Scholl, commemorating her parents, pointed out that she was very touched that so many interested people were attending, and expressed her thanks in emotional words. District councillor Eva Greis thanked the Association, emphasizing the importance of this kind of commemorative work, and declared her willingness to further support the project. She had had installed Stones for her three uncles, and spoke about her arduous research activities, which then allowed her and all of us to learn about her family.

Next on the programme was the joint visit of the Stations.

Herminengasse 21 and Krummbaumgasse 10: Ms. Berkson (building owner) had initiated plaques on the walls of all her buildings.

Herminengasse 10: Edna Weissman Magder from Canada commemorating her grandmother, together with her husband and her two grandchildren. The cover of brochure, part 8, shows her family at a Sabbath ceremony.

Lilienbrunngasse 9: to Ms. Berkson, the commemoration of her grandparents is a matter of great concern. 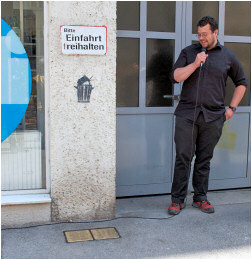 Große Sperlgasse 8: This Station was financed by members of the internet platform “respect”. Matthias Baier spoke about his cooperation with the platform (www.respect.net).

Following a lunch break with delicious catering and inspiring conversations in Café Einfahrt (Haidgasse 5), we went on to visit the other new Stations.

Castellezgasse 29: Elisabeth Spiola had come with her family to commemorate her mother. She spoke about the great importance the Stone had for her.

Odeongasse 9: Frankie Blei had initiated this Station, commemorating her aunt Regine Politzer. But she can come to Vienna from Australia only next year. Edna Weissmann Magder and her family sang the Kaddish for Regine Politzer.

Johann von Gott Platz 2: Eva Greis commemorating her three uncles. She read out a touching letter, written by her uncles to their sister on October 20, 1941.

Zirkusgasse 3: Ms. Kandel commemorating her great grandfather. She spoke about her family’s history. Frankie Blei honours her grand aunt, a family member reads out a prayer.

Tempelgasse1: Ms. Friedrich commemorating her grandparents and her great grandmother. Ilse Grosser read out the text about the family of Ms. Friedrich.