On May 15, 2011 the 6th part of the Path of Remembrance through Leopoldstadt was inaugurated in Haidgasse 3. Despite heavy rainfall, many people and family members came to attend the event and to join the following walk along the stations of the Path.

The event was framed by the music of the trio “Margaritkes“ (Esther Jelinek, Christoph Kögler, Daliah Hindler), singing Yiddish and Hebrew songs. Peter Mlczoch of the Local Support and Coordination Service (Gebietsbetreuung Leopoldstadt) acted as the guide throughout the programme.

Krezimir Mladensich, district councillor of Leopoldstadt, delivered a speech emphasising the homage to the Spain fighters – who are commemorated by a special plaque in this part of the Path. Peter Schwarz expressed his high esteem for the Stones of Remembrance, then building the bridge to current refugee policy which, once again, segregates scapegoats (the others). [download speech ]

Elisabeth Ben David-Hindler first of all welcomed the family members, a group of which had come from France. Also attending were several schoolgirls who had worked on a project dealing with the Stones. In her speech Ben David-Hindler presented the manifold activities of the Association, with special emphasis on the second generation. The generation whose parents were persecuted is carrying a heavy burden, entailing a frequent need to justify having survived and living. Working for the Association means to her personally, among other things, looking into this part of her own history. 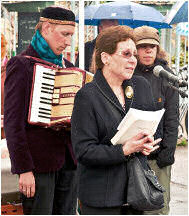 Angela Schluter read out loud letters her grandmother Klothilde Hahn had written to a friend shortly before being deported. The mother of A. Schluter was able to survive only by assuming a new identity and marrying a National Socialist.

Also attending was the son of Christine Margarete Denner, the identity of who saved the life of Edith Hahn.

Peter Schwarz of ESRA (consulting and treatment centre for survivors of the holocaust) spoke about the healing effects emanating from the Association’s activities. Due to his own work with survivors of the Shoa he is able to esteem these effects highly. Then the plaque commemorating Spain fighters of the 2nd district, who were killed in action and murdered, was unveiled. As a representative of the „Vereinigung österreichischer Freiwilliger in der Spanischen Republik 1936-1939“ (Association of Austrian volunteers in the Republic of Spain 1936-1939) Irene Filip delivered a speech, and actor Ottwald John presented pertinent texts.

Visiting the stations was very touching. The relatives spoke about their families and fates.

The descendants of the Sonnenfeld family, living in France and in Vienna, established contact only a while ago. They had not known of each other because their parents had not wanted to talk about the past. The 94 year old mother of the French line has survived as the only member of her family. Her parents and her five brothers and sisters were murdered.