Inauguration of the 11th Part of the Path of Remembrance (1st part) in Leopoldstadt on Sunday, 21st May 2017

The group Avanim opened the proceedings in with the song: “Volt ich gehalt kojech”.

Matthias Beier cordially welcomed the relatives and all those present. District Head Uschi Lichtenegger, who has actively supported the association since its inception, described her pleasure in representing the District at the ceremony. She emphasised that the Stones have a very big and lasting influence in the character of Leopoldstadt. “Every name on the Stones stands for a person who lived, loved, and worked … here in Leopoldstadt. Such discrimination against distinct populations should never be permitted to exist again. ”

Matthias Beier stated that: “These Stones enable victims to make a symbolic return and have a place in our lives…”

Over 400 Stones of Remeberance have so far been set in Vienna, almost half of them in the Leopoldstadt.

He gave special thanks to Peter Mlczoch for his support with planning and organization, to Jarmila Böhm for her assistance with the layout of the brochure and to Rudi Forster for its editing.

Avanim ended the ceremony with „am Ende Mir leben ejbig“.

Following the ceremony, the group visited each of the new stations under the direction of Daliah Hindler.

Lilienbrunngasse 11
Inauguration of a wall plaque 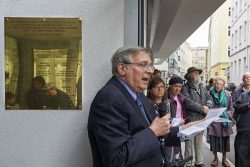 Howard Jaeckel traveled with his family from New York to commemorate his grandparents Friederike and Hermann Jaeckel.

The owners of the building, Steiner Real Estate Group, also spoke in tribute to victims and provided financing for the wall plaque.

Carol Mutterperl traveled from New York with her family and three grandchildren to commemorate her grandfather Max Frieser.

Thanks to Peter Mlzoch, a lunch was organised in the District Supervision Offices at Max Winter Platz. Matthias Beier provided a delicious stew, bread and drinks to the delight and the satisfaction of all.

Rachel Igel traveled from Los Angeles with her family. She is the granddaughter of Bee Igel, whom we commemorated at this station. “My grandmother always dreamed that the family would be reunited. Unfortunately, this never happened. ”